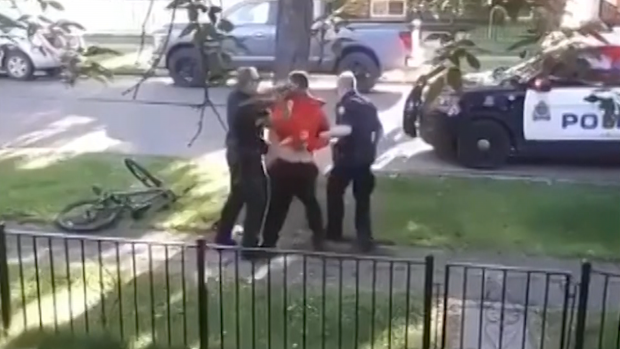 EDMONTON —
An Edmonton police officer has been found guilty of assault after a violent 2019 arrest of an Indigenous man that was caught on camera.

Video showed Const. Michael Partington dropping his knee into the back of a suspect who was prone on the ground.

“The defendant’s knee stun not only was unnecessary, but in the circumstances a gratuitous assault on an unresisting suspect,” reads Ayotte’s ruling.

At trial, Partington claimed to be helping a fellow officer restrain the suspect and that his use of force was reasonable given the circumstances.

He has been suspended without pay since charges were laid in June 2020.

Sentencing is scheduled for Oct. 1.

The man’s anguished cries can be heard during the arrest, at one point yelling, “I didn’t do anything” as he’s subdued.

“Please stop!” the man yells repeatedly as officers pin him down.

Another police officer walking over from a parked vehicle drops his knee into the man’s back, causing him to scream out in pain once again.

“Do not run from the police,” an officer yells back. “Do you think I wouldn’t catch you?”

“You ran away from me,” one officer later says. “You didn’t even confirm your name.”

As the man is stood up to be taken to a nearby police vehicle, he asks the officers, “What is your problem?”

An officer then appears to strike him in the face, causing him to scream and fall to his knees.

Partington has been an EPS officer for five years after a career in the Canadian military.