Drake, The Weeknd poised for big night at Billboard Awards 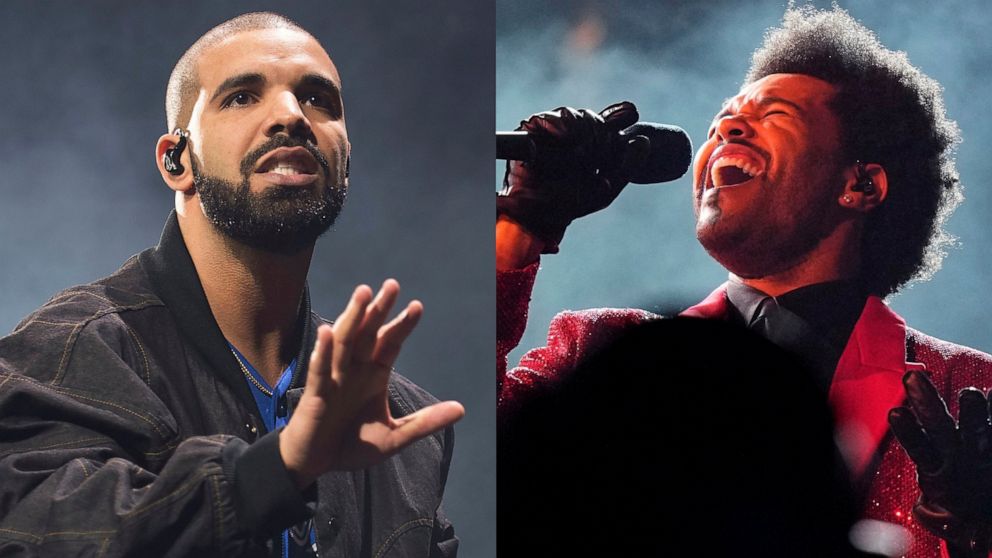 NEW YORK — Some of the Grammys’ biggest critics, who felt they’ve been overlooked at the famed awards show, will take center stage at another event: the 2021 Billboard Music Awards.

The Weeknd called out the Grammys last year when he didn’t earn a single nomination for its 2021 show, despite having the year’s biggest song with “Blinding Lights” and a multi-platinum, multi-hit album with “After Hours.” But at Sunday’s Billboard Awards, he’s the top nominee competing for an impressive 16 awards.

With 27 wins, Drake is the most decorated artist in the history of the Billboard Awards. He’s up for seven honors this year and will receive the Artist of the Decade Award.

Drake has won four Grammys and The Weeknd has earned three — though they’ve been restricted to wins in the rap and R&B categories, instead of winning prizes like album, song or record of the year.

But the Canadian performers will battle for the top prize at the Billboard Awards — top artist — where competition includes Taylor Swift and late rappers Juice WRLD and Pop Smoke.

Despite dominating the charts and streaming services, Juice WRLD was also snubbed at the Grammys, held in March. Pop Smoke was restricted to a single nomination — best rap performance for the hit “Dior.” However, Swift won album of the year for a third time with “evermore.”

The Weeknd, Swift, Juice WRLD and Pop Smoke will compete for top Billboard 200 album, along with Lil Baby.

Unlike other awards shows where committees determine nominees, the Billboard Awards’ finalists are based on album and digital sales, streaming, radio airplay and social engagement. The nominees for the 51 categories are based on the chart period of March 21, 2020, through April 3, 2021.

It’s the reason why controversial country singer Morgan Wallen is nominated for six awards. Because Wallen was caught on camera using a racial slur earlier this year, he wasn’t allowed to compete at the Academy of Country Music Awards or CMT Music Awards. But despite the fallout, he’s had major success on the country and pop charts with multiple songs from his sophomore album, “Dangerous: The Double Album.”

But Sunday will be jam-packed with other A-listers: Performers include The Weeknd, BTS, Bad Bunny, Doja Cat and SZA, twenty one pilots, DJ Khaled with H.E.R. and Migos, Karol G, Alicia Keys, Duran Duran, Jonas Brothers with Marshmello, and Pink, who will earn the ICON Award.

Following The Weeknd, DaBaby is the second most nominated act with 11. Pop Smoke earned 10 posthumous nominations, while Barrett is the leading female nominee with nine.

Denial of responsibility! NewsConcerns is an automatic aggregator of the all world’s media. In each content, the hyperlink to the primary source is specified. All trademarks belong to their rightful owners, all materials to their authors. If you are the owner of the content and do not want us to publish your materials, please contact us by email – [email protected]. The content will be deleted within 24 hours.
Arts and entertainmentAward showsBillboard Music AwardsCelebrityCountry musicEntertainmentGeneral newsGrammy Awards
0
Share