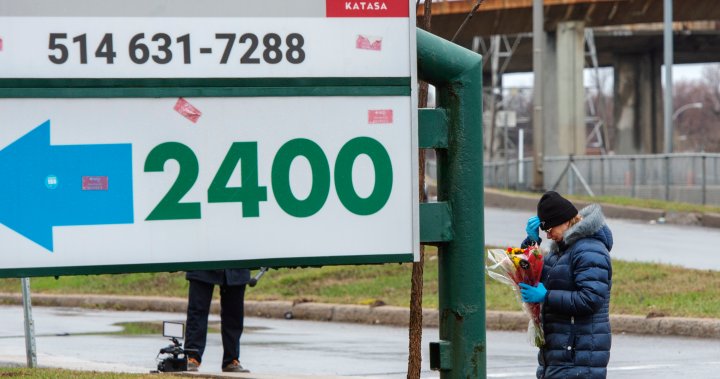 A doctor who oversaw the care of residents of a Montreal-area care home where dozens of patients died of COVID-19 told an inquest Wednesday she was concerned about the lack of staff and personal protective equipment at the facility as infections began to mount.

Dr. Orly Hermon was one of three doctors who had Residence Herron residents as patients, but in the early days of the outbreak they were under instructions to treat patients remotely.

At a Quebec coroner’s inquiry into the pandemic response at elder care homes, Hermon said she was concerned as the facility began to declare positive cases but had trouble filling staff rosters and didn’t have any PPE on hand.

Hermon says the facility in Dorval, Que., didn’t have a nursing director to co-ordinate the response, and when she reached out to the local health authority, she was told it was also experiencing shortages of workers and PPE.

“I was worried that there was no proper preparation for testing, for disinfection, for the protocols,” she testified on Wednesday.

As Herron’s manager fell ill with COVID-19 and the facility’s owner scrambled to find staff to care for patients, Hermon says she sent an urgent text to a health authority doctor asking for help on March 29.

Hermon says the owner of the facility and regional health officials described a lack of co-ordination and co-operation.

“It was clear that they didn’t seem to be working together,” she said, adding the situation improved after the health authority fully took over, with more staff and managers added by mid-April.

While it became clear after a first case on March 27 that other residents were presenting symptoms, widespread testing only happened around mid-April, and only after that were COVID hot zones established to keep those infected separate. Until then, the entire facility was considered a hot zone.

The coroner’s mandate is to investigate 53 deaths at six long-term care homes and one seniors residence — including 47 at Herron — during the first wave of the COVID-19 pandemic.

1:31
Coroner’s inquest in to the tragedy at the Herron long-term care home continues

Coroner Géhane Kamel wondered why the doctors didn’t defy instructions from the government and a professional order to limit contact by using telemedicine for patients in long-term care. Hermon said the lack of PPE and fear she could infect other patients loomed large.

“I understand that there is a directive,” Kamel said, “but whether it is at Herron or elsewhere in Quebec, there are doctors who have decided that they (don’t care about the) directive, (and say), ‘We will go because these are our patients.”’

Dr. Lilia Lavallée, another doctor who had patients at the facility, returned to the home on April 11, the day after a Montreal Gazette report detailed how bad the situation was inside Herron. “I read it late after dinner, and it showed a situation that I was not aware of, the extent of what was happening there,” Lavallée testified.

The coroner questioned how she couldn’t have known, given that other doctors had seen the situation first-hand and one even brought her family in to help care for patients.

“I tell myself that if this man (reporter Aaron Derfel) hadn’t written the article in the Gazette, would we have gone from 47 to 130 residents that died?” Kamel asked.

Earlier Wednesday, a nurse who volunteered at Herron testified there was such a dearth of equipment when she arrived to volunteer on April 3, she took residents’ vital signs using the same device without sterilizing it between patients.

The nurse, testifying with a publication ban on her identity, said she kept the same pair of gloves all day. She noted the availability of PPE improved after her first day, but nurses went in not knowing the patients or their histories.

“There was a co-ordinator, but we did what we could because there was no one (from Herron staff) who knew the residents,” she said. “We knew nothing. It was difficult to know what to do with each patient.”

Denial of responsibility! NewsConcerns is an automatic aggregator of the all world’s media. In each content, the hyperlink to the primary source is specified. All trademarks belong to their rightful owners, all materials to their authors. If you are the owner of the content and do not want us to publish your materials, please contact us by email – admin@newsconcerns.com. The content will be deleted within 24 hours.
Canada CoronavirusCHSLD HerronCoronavirusCoronavirus CasesCoronavirus In Canadacoronavirus newscoronavirus updateCOVID
0
Share