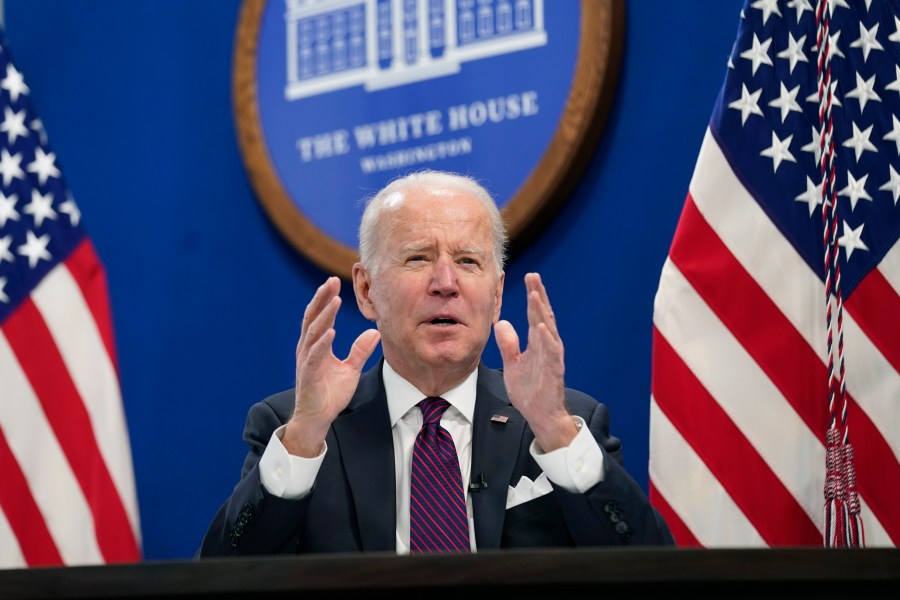 WASHINGTON (AP) — Democrats were picking up the pieces Thursday following the collapse of their top-priority voting rights legislation, with some shifting their focus to a narrower bipartisan effort to repair laws Donald Trump exploited in his bid to overturn the 2020 election.

Though their bid to dramatically rewrite U.S. election law failed during a high-stakes Senate floor showdown late Wednesday, Democrats insisted their brinksmanship has made the new effort possible, forcing Republicans to relent, even if just a little, and engage in bipartisan negotiations.

The nascent push is focused on the Electoral Count Act, an 1887 law that created the convoluted proces s for the certification of presidential election results by Congress. For more than 100 years, vulnerabilities in the law were an afterthought, until Trump’s unrelenting, false claims that voter fraud cost him the 2020 election culminated in a mob of his supporters storming the Capitol.

An overhaul of the Gilded Age statute could be Democrats’ best chance to address what they call an existential threat to American democracy from Trump’s “big lie” about a stolen election. But with serious talks only beginning in the Senate and dwindling time before this year’s midterm elections, reaching consensus could prove difficult.

“We know history is on the side of voting rights, and we know that forcing leaders to take stands will ultimately move the ball forward,” Senate Majority Leader Chuck Schumer said Thursday.

Just weeks ago, many Democrats were adamant that updating the Electoral Count Act was no substitute for their voting legislation. Updating the 1887 law, they pointed out, would do nothing to counter the Trump-inspired push in 19 states to make it more difficult to vote.

Analysis: What’s next for Biden after his voting bill failed?

They still hold that position, but after the defeat of their marquee elections bill, they are running out of options. Meanwhile, Trump loyalists are girding for the next election, working to install sympathetic leaders in local election posts and, in some cases, backing political candidates who participated in the riot at the U.S. Capitol.

Biden conceded this week that updating the electoral bill may be Democrats’ best opportunity to pass voting legislation through a 50-50 Senate, where much of his agenda has stalled.

“I predict to you they’ll get something done,” Biden told reporters Wednesday.

Any legislation would have to balance Democrats’ desire to halt what they view as a GOP plan to make it more difficult for Black Americans and other minorities to vote with Republicans’ entrenched opposition to increased federal oversight of local elections.

“What other things could be put in there?” said South Carolina Rep. Jim Clyburn, the No. 3 House Democrat and a senior member of the Congressional Black Caucus. “I want to deal with more than just counting the votes for the president. I want to be sure that we count the votes for everybody else. So voter nullification like they’re doing in Georgia, I think it can be addressed.”

Republicans involved in the effort to update the Electoral Count Act acknowledge that the bill would need a wider focus.

“It’s such a needed thing,” said Manchin, who added that the narrower scope was “the first place” Democrats “should have started.”

Manchin and Sinema effectively tanked Democrats’ marquee bill Wednesday, joining Republicans in voting against a rule change that would have allowed the party’s voting legislation to pass with a simple majority.

Collins has proposed new protections for poll and elections workers, some of whom received chilling threats to their safety after the 2020 election. She has also called for more funding for local elections. Manchin wants harsh criminal penalties for those convicted of intimidating or threatening poll and election workers.

“It’s a heavy lift, but if we continue to get people to talk, there’s a path,” said Tillis, who said tensions over the Democrats’ failed voting bill will need to cool before coalition-building can seriously begin. “We are going to have to have more Republicans get on board because there are going to be protest votes.”

But at its core, many Republicans want any legislation to primarily focus on the Electoral Count Act.

House Republican leader Kevin McCarthy on Thursday called it “an old piece of law, so you can always modernize it.”

The bipartisan House committee investigating the Jan. 6 insurrection is also working on a proposal.

As Trump’s legal appeals and efforts to pressure state and local officials ran out of steam, he began to focus on Mike Pence, who presided over the certification in Congress of the Electoral College results. Trump spent days in a futile bid trying to convince Pence that the vice president had the power to reject electors from battleground states that voted for Biden, even though the Constitution makes clear the vice president’s role in the joint session is largely ceremonial.

Separately, he encouraged Republican lawmakers to take advantage of the low threshold to lodge objections to the outcome. Even after rioters fought in brutal hand-to-hand combat with police as they lay siege to the Capital on Jan. 6, 147 Republican lawmakers later voted to object to Biden’s win.

Sen. Angus King, a Maine independent who caucuses with Democrats, is working on a bill that would shore up several key vulnerabilities in the Electoral College process.

Any legislation should make clear the vice president holds only a ceremonial role, limit the scope of Congress’ involvement in the certification of the election and narrow the grounds for raising an objection to a state’s results, according to a summary provided by his office.

Civil rights activists don’t object to the revisions. But they question the value of the effort if Republican-controlled states can still enact voting restrictions.

“It doesn’t matter if your votes are properly counted if you cannot cast your vote in the first place,” said Sen. Raphael Warnock, D-Ga., who is also pastor at the church Martin Luther King Jr. once led.

Not sure how to find us? Here’s how to watch NewsNation on TV and online.

Are you a ‘busy explorer’ or ‘quality time seeker?’ Study splits travelers according to time use, environmental impact