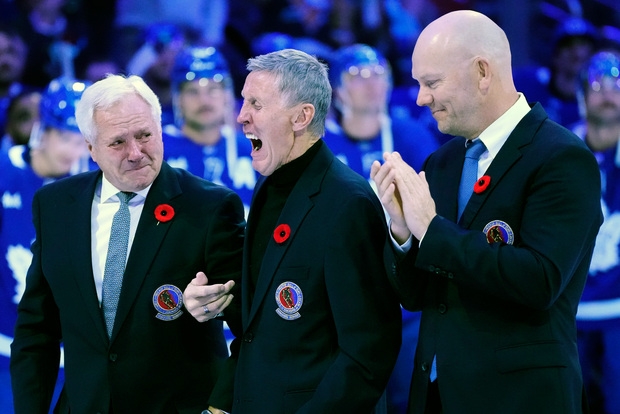 Darryl Sittler took himself back almost 50 years, to when he saw first-hand the raw courage of Borje Salming on ice.

In one of most rough-n’-tumble eras of hockey, they battled together; Sittler to score goals, Salming to prevent them.

“There was an element of fear and intimidation in the game,” Sittler said of the 1970s, the Broad Street Bullies and other rogues who targeted the so-called chicken Swede. “Opponents were so focused on getting to him, spearing him, hitting him (sometimes fighting him in one-sided decisions). He took it all. And then he took his game to another level.

“We all remember the long standing ovation for him  at the Gardens for the Canada Cup in ’76.”

Then there was the quiet courage Salming summoned the past few weeks. Dying of incurable ALS, attacking a body which had defied his senior citizenry, he was determined to make one last pilgrimage to his adopted home, where his friends and fans had kept a torch burning.

The arena where his legacy hangs from the rafters and is bronzed outside on Legends Row, next to his heir, Mats Sundin, and a Maple Leafs team brimming with a new generation of Swedes.

Robbed of his speech by the disease and needing help from fellow Hall of Famers Sittler, Sundin Lanny McDonald and his wife Pia, Salming made two pre-game trips out on the blue carpet for a ceremonial puck drop.

There was not a dry eye at Scotiabank Arena when he mustered the strength to wave during extended crowd cheers.

“Man, that was so special,” Sittler said during a phone interview on a Thursday that began with a call from Sweden that Salming had passed. “It was so emotional for all of us, for Mats to be there (years earlier Salming urged Sundin to take the Leafs captaincy, regretting he’d turned down the chance to make history when offered the departed Sittler’s ‘C’ in the 1980s). It showed Borje how much was loved in the city.

“Up until a day and a half before that, we had no idea he was going to be well enough to fly and go out there (initially for the Hall Of Fame Game, then the Leafs’ tribute the next night).

“He’s at peace now. If it had to be, you couldn’t have scripted his last days better; spending time with me, Tiger Williams, Lanny, Jim McKenny, Al Iafrate, in a ceremony where more Swedes went in the Hall, Daniel Alfredsson and the Sedins.

“He was able to listen and laugh at all the old stories. What made us feel good was his wife saying that since his diagnosis, she’d not seen him happier. He’d been so depressed.”

Many fans wore vintage No. 21 sweaters to the games.

“When we took him to the airport, I gave him a big hug and knew it would be the last time,” Sittler said.

“He went home and was able to make it to the ceremony the Swedish hockey federation arranged. I was in touch with Pia every day. But we all knew the outcome. It was probably a blessing that it happened so fast.”

Though he couldn’t speak, Salming was able to put the difficulties of ALS sufferers, their fight for a cure and to secure treatment drugs, on the public stage. He and Pia had just set up an ALS fundraising foundation in Sweden that would also provide resources for sufferers and their families, with Nicklas Lidstrom named to the board of directors.

Canadian advocate Mark Kirton, the former Leaf who has suffered four years with a different form of ALS and who tried to keep Salming’s spirits up these past months, paid tribute on Twitter.

“A sad, sad day. He died a good death, meaning his family was around him and he didn’t allow the ALS monster to rip him apart, piece by piece over time. King outsmarted the (expletive) disease. It’s time to rest. God bless.”

Rasmus Sandin and William Nylander, two other countrymen Salming took the time to meet and smooth their way for life as a Leaf, spoke fondly of him Thursday after Leafs practice in St. Paul, Minn., as did Timothy Liljegren and goalie Erik Kallgren.

“Seldom in our lives does someone like that come along and leave that kind of impression,” Sittler said.

Taliban Urges Afghan Refugees To Stay Away From Protests In Iran, Pakistan