Damian Warner back home in London, Ont. after record-setting performance 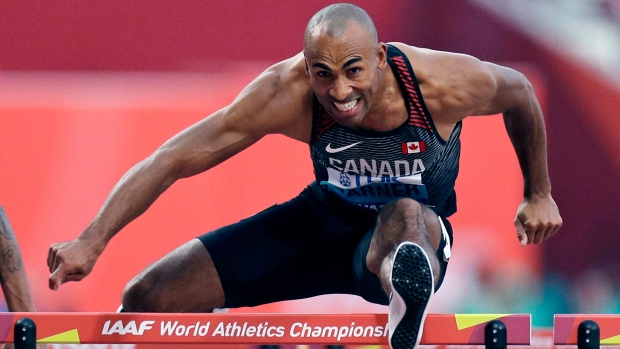 ST. THOMAS, ONT. —
Damian Warner sent a clear message to his fellow Olympians this past weekend.

The 31-year-old from London, Ont., scored 8,995 points to win the Hypo-Meeting in Austria, becoming the first person to win six titles in the prestigious event. His total was the fourth-highest in history

“That’s putting up a huge score and saying ‘OK boys come and get me’,” says Gar Leyshon, Warner’s coach. “The only better scores in the world are all records and he’s announced himself as the top dog, and I love it.”

He set world decathlon records in the long jump and 110 metre hurdles. It’s an impressive accomplishment considering the COVID-19 restrictions in Ontario.

Unlike many of his competitors from around the world, he was training in a City of London arena and only began training outside a month ago.

“This past year and a bit with COVID and the training facilities, that was the toughest situation that I’ve had to deal with since I became a decathlete,” says Warner, who is quarantining alone in London.

“I’d like to say we handled it pretty well, set ourselves up and came out of it healthy.”

Leyshon says winning in Gotzis, Austria wouldn’t have been possible without the help they received during the pandemic.

“The track and field community, Athletics Canada, Doug Wood from Bolton, Ont. who helped with pole vault, Vickie Croley from Western Track and Field, Vito Frijia, Western University and the City of London for giving us the arena to train,” he says.

“In some ways, it was ridiculously constrained, but at the same time, it was also the best that we could possibly have hoped for given the situation. Damian just took it and ran with it.”

A two-year break from competition allowed Warner to get healthy physically and mentally. His outlook changed with the birth of his son in early March.

“There was a lot of times throughout the winter where you’re kind of just waiting for the first chance to go outside or to have a better training situation,” says Warner.

“I think having the baby, and kind of going home and having kind of different priorities to deal with at home, really kind of bring brought some balance the whole situation. It give me something to look forward to off the track, and kind of allowed me to get my mind off of training in a little cold arena.”

He adds, “I’m super, super grateful that the performance that I had and the position that I’m in right now but also super grateful to be a father and, yes, it’s awesome that Jen (Cotten) and I have started a family.”

Leyshon noticed a difference in Damian after the birth of his son Theo in March.

“It’s freed him up,” says Leyshon. “He was free and easy for the first time in years. He was healthy, he was happy he was thrilled to be there. You could see his emotions when he won the 100 metre, he was high-fiving people, but then when he hit that long jump, he just exploded out of the pit. He was pounding his chest and never in a million years would I have bet on Damian doing that. He took off screaming down the track like a little kid. I love the fact that he enjoyed it so much, and he was so happy with his performance.”

Warner and his coaches will spend a couple of weeks in quarantine, then resume training. He expects to attend the Canadian Championships prior to the Olympics in Tokyo, Japan which are now two months away.

It’s evident he’s the man to beat for the gold medal.

Warner agrees that if he duplicates his effort from Gotzis, he should top the podium.

“Gar and I have always believed that if I perform at my best then I’m able to get the gold medal,” says Warner.

“Right now we’re kind of just allowing yourself to kind of let the dust settle a little bit and kind of take in what we just did. Then we’ll get back into some things and start preparing for Tokyo. To go to Austria and have the first competition in two years was a great break up from all the training. Tokyo is coming up quick and I think we’ll be ready.”