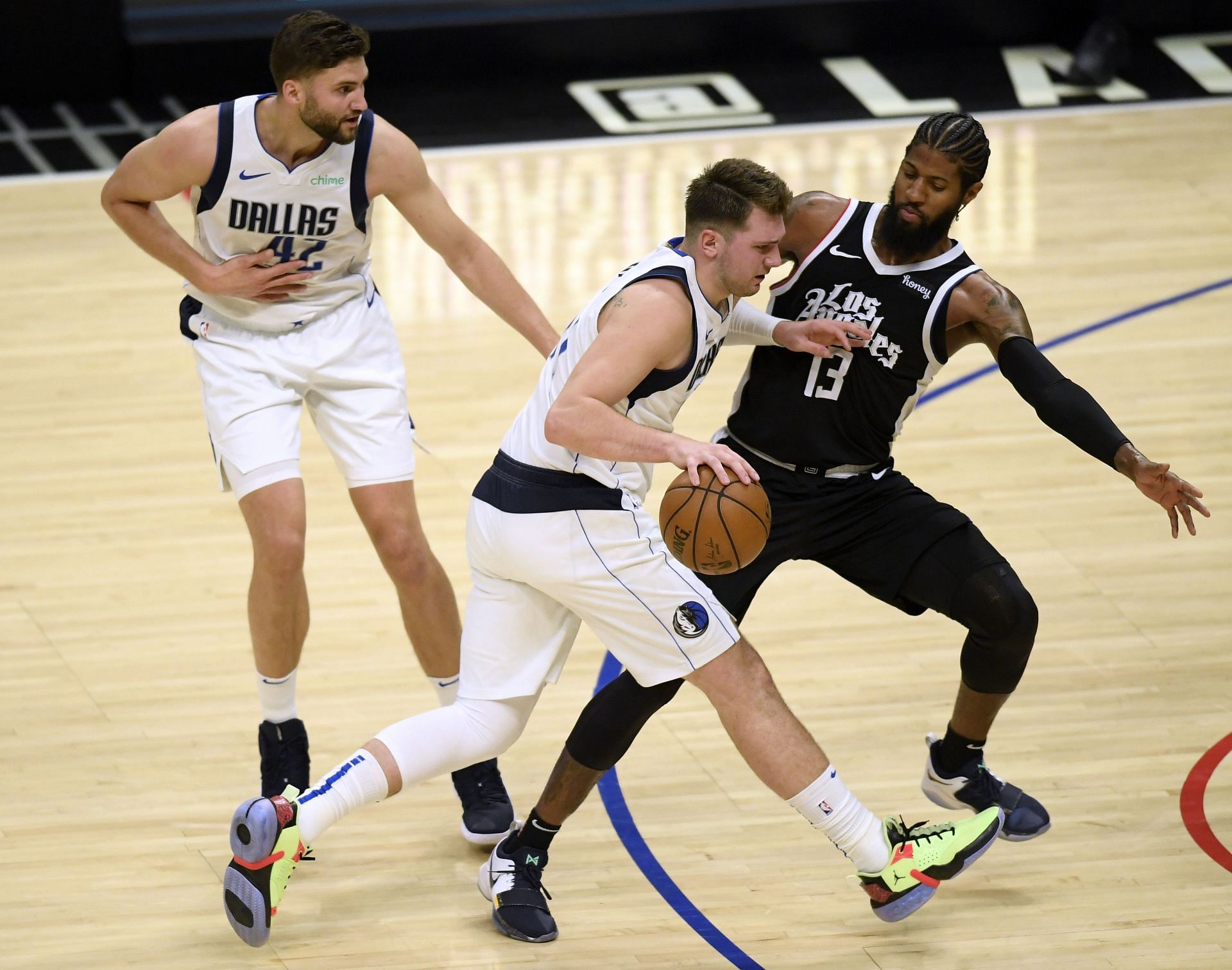 The Dallas Mavericks face off against the LA Clippers for the back end of a two-game set between the two teams at Staples Center on Tuesday. The Clippers beat the Mavs 97-21 behind a 29-point performance by Paul George in their first encounter Sunday.

Luka Doncic was absent from the Dallas Mavericks’ lineup in that game and is questionable Tuesday. Meanwhile, the LA Clippers are missing their fair share of players, too.

The Dallas Mavericks are struggling without Luka Doncic. The superstar, of course, is their focal point, leading the team in points (24.9), assists (7.9) and rebounds (8.3). Doncic leads the league in usage rate and averages roughly 75 pick-and-rolls per 100 possessions. Hence, it is understandable the Mavericks offense will struggle without him.

The Mavericks (9-7) have lost their past three games, including back-to-back losses at the Phoenix Suns before their second consecutive two-game set on the road.

Big man Kristaps Porzingis tried to will the Dallas Mavericks to a win in their last game against the LA Clippers. He scored 25 points on 10-for-18 shooting to go with eight rebounds, two assists and two blocks. However, the rest of the squad under-delivered. Guard Tim Hardway Jr. will have to have a better outing than Sunday, when he scored just eight points on 2-for-12 shooting.

With Luka Doncic out, Kristaps Porzingis has found a revitalized role on the Dallas Mavericks. Over the past six games, he is averaging 25.3 points per game on 53/40/92 shooting splits along with 9.7 rebounds, 2.5 assists and 1.5 steals per game.

This is the best Kristaps Porzingis has played in more than a year, @tim_cato writes.

“It’s a massive improvement from the player reduced to a tertiary role in last year’s postseason.”

What will happen when Luka Doncic returns?

This is the best Kristaps Porzingis has played in more than a year, @tim_cato writes.“It’s a massive improvement from the player reduced to a tertiary role in last year’s postseason.”What will happen when Luka Doncic returns????? bit.ly/3FHQSrV https://t.co/KX08jvYNZe

The LA Clippers are ranked a surprising second in the league in defensive rating despite their two-time Defensive Player of the Year Kawhi Leonard not playing this season after having surgery on his right ACL in July.

The LA Clippers (10-7) are one of just nine NBA teams with double-digit wins, but they aren’t looking like championship contenders yet. Their playoff hopes are alive simply because of Paul George’s performances.

Reggie Jackson showed up big in their last game against the Dallas Mavericks. He scored 23 points on 8-for-14 shooting, including 4 of 8 from 3-point range. Ivica Zubac dropped 16 points on 6-for-7 shooting to go with 10 rebounds. Terance Mann, Serge Ibaka and Luke Kennard combined for 22 points off the bench.

Paul George has done a fabulous job carrying the LA Clippers on a nightly basis despite the injuries on the roster. They have won several huge games because of him, and he is on every major MVP tracker right now, including the NBA’s own. He is the league’s sixth-highest scorer at 26.4 ppg and leads the Clippers in points, assists (5.2) and steals (1.9), while being second in rebounds (7.7).

The LA Clippers look like favorites, even if they have lost three of five after a seven-game winning streak. The absence of Luka Doncic is a huge blow to the Dallas Mavericks. The two teams have faced each other in the playoffs for two straight seasons, so they know each other’s game plan and strategies.

But if Luka Doncic’s status upgrades from questionable to available, then the Dallas Mavericks’ chances will go up considerably.

Where to watch the Mavericks vs Clippers game?

The matchup between the Dallas Mavericks and LA Clippers will be broadcast locally on Bally Sports Southern California (SoCal) and Bally Sports Southwest – Dallas (SW-DAL). The game can also be live-streamed with an NBA League Pass.

Denial of responsibility! NewsConcerns is an automatic aggregator of the all world’s media. In each content, the hyperlink to the primary source is specified. All trademarks belong to their rightful owners, all materials to their authors. If you are the owner of the content and do not want us to publish your materials, please contact us by email – admin@newsconcerns.com. The content will be deleted within 24 hours.
BasketballDallas MavericksKristaps PorzingisLos Angeles ClippersNBA Injury UpdatesNBA NewsNBA PredictionsNBA Trending News
0
Share

Waukesha Christmas parade: What we know so far about suspect