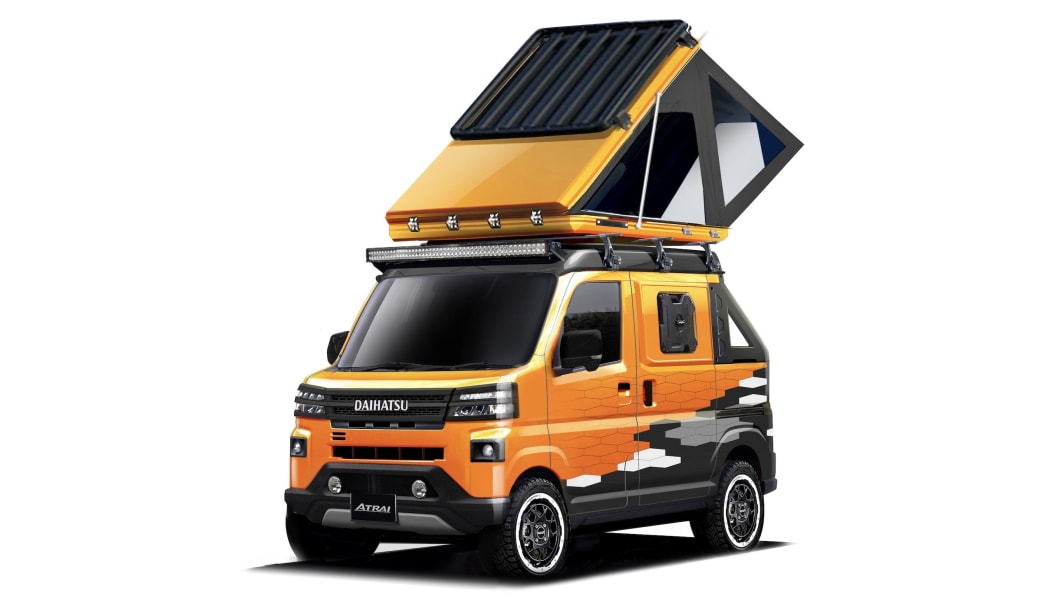 Daihatsu is heading to the 2022 Tokyo Auto Salon with a selection of modified cars. The event is known for its high-performance sports cars and extravagant luxury rides, so how does a company specializing in kei cars and compacts stand out? By headlining a kei camper with a folding rooftop tent. #Vanlife!

The Daihatsu Atrai Deck Camper started out as a kei delivery truck for Japan’s narrow city streets. It’s a notable vehicle for being the only kei truck that has four doors and a pickup-like bed in the back. Not only that, but the two rear doors are of the sliding variety, and the tailgate folds open 180 degrees.

Normally, this would seem to be a hit with refrigerator or grandfather clock repairmen, but Daihatsu sees it as the perfect camping car. The rooftop canopy appears to open and fold outward in shapes that mimic the added buttresses along the bed. Additional expedition gear comes in the form of a safari rack on top of the tent shell, an LED light bar and what appear to be two pairs of auxiliary lights in a bespoke front fascia.

Daihatsu’s building four other vehicles for the Auto Salon. One is a more luxurious version of the fully enclosed Atrai van, fitted with a grille rivaling that of the new Silverado. Another Daihatsu HiJet kei truck is described as an assembly experience truck for the Copen roadster. Though we only have a cartoony illustration to go with it for now, it looks like you’ll be able to construct the nose of a Copen in the truck’s bed.

Last but not least, Daihatsu is showing two variants of the revived Daihatsu Rocky. Gen X readers might remember that name from the Suzuki Samurai-esque off-roader that was sold briefly in the U.S. from 1988-92. Unlike its body-on-frame predecessors, the new Rockys are unibody compacts. The show cars depict a luxury-leaning version and an off-road version.

Should Daihatsu ever return to the U.S. market the Rocky would probably sell well in crossover-crazy America, but the real MVP would be a production Atrai Deck Camper.