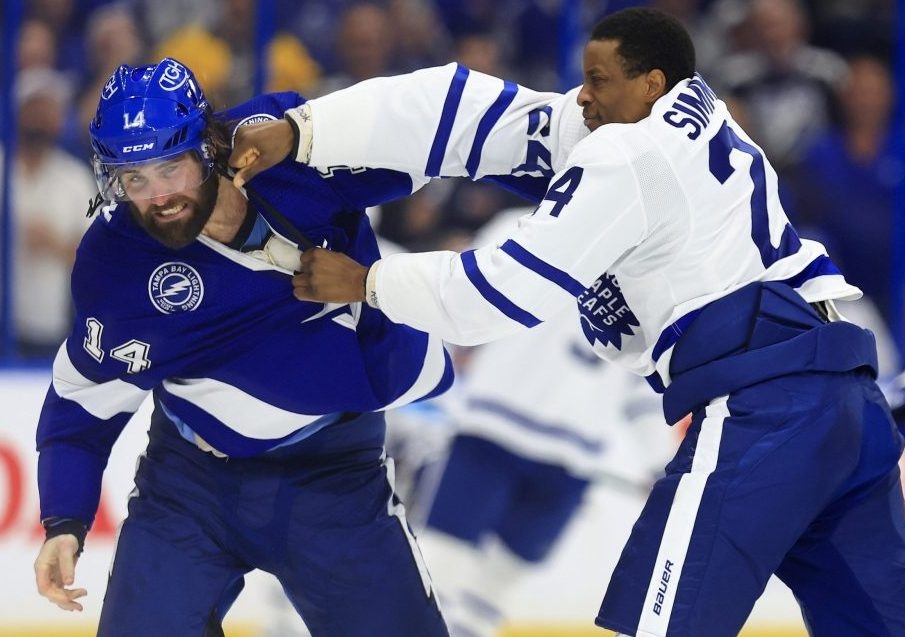 ST. PAUL — The time for a Timmins run is not yet here, but the Wayne Train is back on track.

Though it was confirmed the Maple Leafs will be down another defenceman, with three road games in four nights starting Friday afternoon against the Wild, they won’t activate new trade acquisition Conor Timmins for the moment.

Having not played at the NHL level since October with the Arizona Coyotes, just off a conditioning stint and unfamiliar with Toronto’s system, coach Sheldon Keefe thought one short practice here Thursday was not ideal launch conditions.

“We have a great need with the injuries we’re going through,” Keefe said of four defencemen now out, Jordie Benn the latest, facing at least a week on injured reserve with an upper body mishap.

“Yet we want to put (Timmins) in a good spot to succeed. He’ll skate tomorrow and we’ll take it a day at time from there.”

Victor Mete, called up from the Marlies after Morgan Rielly went on long-term IR, will move into Friday’s lineup, partnering Mac Hollowell.

That makes the Leafs blueline even younger, Rasmus Sandin, Timothy Liljegren, Mete, Hollowell (one NHL game) all under 25, with Justin Holl (30) and Mark Giordano (39).

Yet the entire blueline cast performed admirably in a 2-1 win over New Jersey on Wednesday, ending that club’s 13-game win streak.

Other changes for the Wild match will see winger Wayne Simmonds come back from roster purgatory, after playing just once this month and just clearing waivers a second time. Going by Friday’s practice lines, he’ll be on the fourth unit with Pontus Holmberg centring he and Alex Kerfoot.

Calle Jarnkrok is getting a second line left wing promotion with hot duo John Tavares and Mitch Marner, while Nick Robertson sits after playing Wednesday and Denis Malgin is still a scratch.

PICKING THEIR SPOTS
With the Leafs putting together a solid November despite their long sick list, a record of 7-1-3, there’s less pressure on Keefe and general manager Kyle Dubas to rush every new face into the fray.

“With the guys who are out, we can carry 23 on the roster, we have the flexibility with the cap,” Dubas said. “For us, we think Timmins can help now, but it’s also a future play, big time.”

Dubas drafted Timmins in his last year with the OHL Soo Greyhounds: Keefe know him as a high-end prospect, first pick of the 2017 second round by Colorado, who “dominated” the 2016 World Juniors (a plus 15, five points and the assist on the gold-medal winner).

“And I know he’s had real battles with injuries,” Keefe said. “But we have a lot of opportunity here and a lot of need. For a player with a lot of potential and ability who is looking to find his way, it’s a perfect fit for us.”

Dubas wasn’t feeling cursed that so many defencemen would go down at once.

What began with Liljegren’s hernia operation, stretched into Jake Muzzin’s cervical spine issue and an LTIR situation into the next calendar year, though Muzzin remains with the team doing off-ice training.

TJ Brodie will still be out awhile with his oblique muscle injury, Rielly damaged his left knee Monday and now Benn is gone.

“You never want (injuries), but it seems they always go that way, one position at a time, your goalies are out then your D are out,” Dubas said.

“But for me, the way our coaches and players have handled it, has been excellent. it gives us a real chance to see what we have in terms of depth. You hope everyone will play all 82 games, but it’s certainly a naïve way of thinking.”

BEER LEAGUERS
Friday should be a lot more of a tame game than the Jersey encounter — unless three home team goals are overturned again.

Though the Leafs had a case in all three instances, the Prudential Center crowd didn’t see it that way.

Their team trailed all night without a legal goal and they let loose in the third period with debris, including several beer cans, some still with contents inside that made them hard projectiles. The Leafs briefly left the ice.

In an e-mail to Postmedia, league deputy commissioner said NHL security coordinated with the arena staff and “enhanced safety measures were promptly implemented.”

The barrage bothered Toronto captain Tavares, even though he’s seen raucous crowds in Jersey and Manhattan whenever his former team, the Islanders, visited.

“Disappointing. It’s dangerous,” Tavares said. “It felt better to beat the crowd than the Devils.

“It was a playoff style of game and we put ourselves in a really good spot, played a smart game.”

The road trip concludes Monday in Detroit … Dubas and Simmonds seem to have an understanding about him remaining on call with the team, despite the waiver exercise. “

He’s been great and we’ve had lots of discussions about where he’s at and his role,” Dubas said. “It will probably be like (the past few weeks) an in and out type thing. He’ll continue to work and be ready for when he goes in” … The Marlies are in Cleveland Friday night after a 5-3 loss Wednesday versus Syracuse. With all the Leaf call-ups and Philip Kral injured, their six defencemen versus the Crunch were Noel Hoefenmayer, Marshall Rifai, Matthew Hellickson, Tommy Miller, Matteo Pietroniro and Mikko Kokkonen. Joseph Woll is back in tandem with Keith Petruzzelli in net as the latter recovered from his latest mishap, an ankle injury.