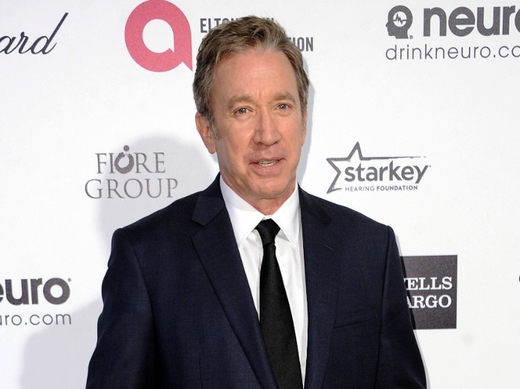 Anderson is making the rounds, promoting her upcoming memoir and Netflix documentary, both of which look at her rise to fame, later life and all the successes in between.

Among the many revelations in her book is a claim that Allen flashed her on her first day on the set.

“On the first day of filming, I walked out of my dressing room, and Tim was in the hallway in his robe,” according to an excerpt from the book. “He opened his robe and flashed me quickly — completely naked underneath.”

She added: “He said it was only fair, because he had seen me naked. Now we’re even. I laughed uncomfortably.”

The 69-year-old denied the tool-flashing incident took place, telling Variety, “No, it never happened. I would never do such a thing.”

Things took a turn, however, after a video clip resurfaced of the actor-comedian appearing to lift his kilt in front of co-star and on-screen wife, Patricia Richardson.

In the clip, Allen’s character, Tim Taylor, is wearing a kilt, to which Richardson’s Jill commented on, saying she wished it was shorter.

Allen then lifted the kilt, much to Richardson’s, and the studio audience’s, delight.

Richardson has since responded to the now-viral clip, clarifying what exactly went down that day — and said there was nothing salacious about it.

“People ask me what was under the kilt when he flashed me, he was well-dressed under there, I was just shocked that he lifted the kilt, not by a man in boxer shorts,” the actress told TMZ.

The clip is actually one of Home Improvement’s many bloopers that played during the end credits of each episode.

Richardson didn’t speak about Anderson’s claims to TMZ, and only shared what she experienced, whereas Anderson’s allegations don’t appear to be blooper-related and implied the incident was between the two of them.

Allen and Richardson have remained close in the years following their Home Improvement run, with the actress even making multiple appearances on his most recent sitcom Last Man Standing.