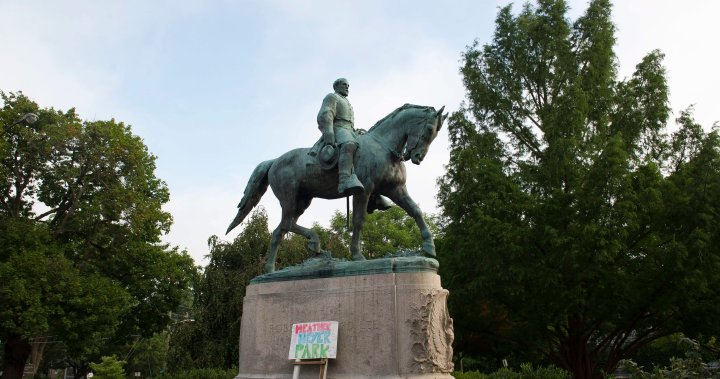 The city of Charlottesville, Virginia, will remove two Confederate statues on Saturday morning, nearly four years after white supremacist protests over plans to remove one of them led to clashes in which a woman was run down by a car and killed.

City authorities will welcome viewers at 6 a.m. local time on Saturday to Charlottesville’s Market Street Park, where the city plans to remove the statue of Confederate General Robert E. Lee, according to city spokesperson Brian Wheeler.

After the removal of the Lee statue has concluded, Wheeler said, the focus will move to a second park in the city where a statue of Confederate General Thomas ‘Stonewall’ Jackson is due for removal.

The city’s planned removal of the Lee statue in 2017 prompted a rally by neo-Nazis and white nationalists that turned deadly when a car driven into a crowd killed a counter-protester, 32-year-old Heather Heyer.

Weeks later the Charlottesville city council unanimously ordered the Jackson statue to be removed from another park in the downtown historic district.

Citizens including the Virginia Division of the Sons of Confederate Veterans sued Charlottesville over the removal plans. In April, Virginia’s highest court ruled the city could remove the two Confederate statues, overturning a state Circuit Court decision that had upheld the citizen lawsuit.

1:06
Victims of Charlottesville attack says second conviction of killer does not eliminate racism

The city installed protective fencing and designated no-parking zones around the parks in anticipation of Saturday’s removals, according to a Friday statement.

Asked whether the city was aware of any planned protests, Wheeler said, “an indication of how we feel about this is, we’re inviting the public to join us in the park.”

“We think a lot of our community members really want to be there to see this happen.”

Denial of responsibility! NewsConcerns is an automatic aggregator of the all world’s media. In each content, the hyperlink to the primary source is specified. All trademarks belong to their rightful owners, all materials to their authors. If you are the owner of the content and do not want us to publish your materials, please contact us by email – admin@newsconcerns.com. The content will be deleted within 24 hours.
charlottesvilleCharlottesville protestsCharlottesville statuesconfederate statuesRobert E Lee statuerobert e. leewhite nationalismwhite supremacists
0
Share

Nevada will not discipline fighters for marijuana use