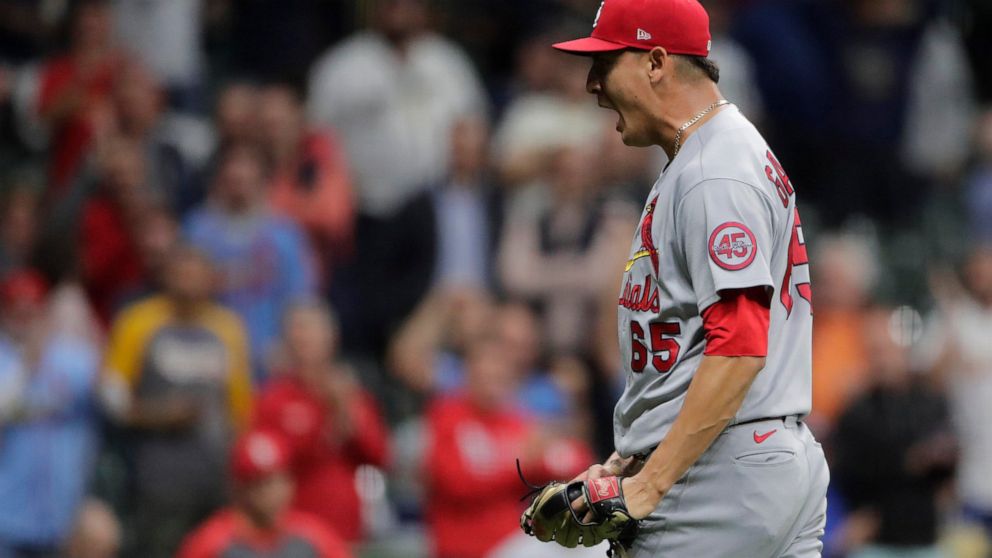 MILWAUKEE — Cardinals closer Giovanny Gallegos fanned pinch-hitter Pablo Reyes with the bases loaded for the final out and St. Louis won its 10th straight game, increasing its lead in the playoff chase by holding off the division-leading Milwaukee Brewers 2-1 Tuesday night.

The Cardinals increased their edge for the second NL wild-card spot to four games over Cincinnati. Philadelphia remained 4 1/2 behind St. Louis while San Diego fell five back.

Milwaukee, which has secured a playoff spot, lost its third straight. The Brewers, whose magic number to clinch the NL Central stayed at three, lead the Cardinals by 9 ½ games.

“It’s hard to capture, because I don’t plan on being done with it. We keep moving to tomorrow,” Cardinals manager Mike Shildt said “Regardless of the time of year you do that, it’s important – this time of year clearly more magnified.”

Avisail Garcia singled to open the Milwaukee ninth and Lorenzo Cain grounded into a forceout — originally ruled a double play, the call was reversed by replay.

After Luis Urias walked, Cain took third on a flyout. Christian Yelich was intentionally walked and Gallegos struck out Reyes for his 11th save, and eighth in nine chances in September.

“Even when he’s not as sharp, he’s still going to figure out a way to compete and you can live with that,” Shildt said. “That’s what he did tonight.”

The Brewers are 2-5 in their last seven games, scoring a total of eight runs in the five losses.

“We’ve just had a quiet week,” Brewers manager Craig Counsell said. “I think we’re going to have a big night one of these nights. We’re going to put a really big number on the board and we’re going to bust out of it. We didn’t do it tonight, but it’s coming. I believe that, I think our guys believe that.”

The Brewers scored once in the eighth off Luis Garcia when pinch-hitter Daniel Vogelbach walked, Kolten Wong doubled and Willy Adames followed with a sacrifice fly.

Woodford allowed just two singles in five innings, striking out five and walking one. Alex Reyes and Genesis Cabrera each followed with a hitless inning.

“You try and stay in the moment and not make it bigger than it is,” Woodford said. “It’s still a normal start and try and treat it that way. But, yeah, we do know every win is big at this point in the year.”

After the first-inning run, Woodruff allowed a pair of third-inning singles in six innings, striking out 10 and walking two.

Edman generated a run for the Cardinals in the first. He worked a nine-pitch walk to lead off, stole second, took third on a groundout and scored on Tyler O’Neill’s sacrifice fly.

The Cardinals made it 2-0 in the eighth when pinch-hitter Lars Nootbaar walked with one out, stole second and scored on Edman’s second hit of the game.

’It’s impressive,” Adames said of the Cardinals’ surge. “They know they have to continue to win to get to the postseason. They’ve been playing really good ball. They’re doing the little things and I think that’s why they’ve been so good right now. You’ve to give credit to them.”

Cardinals: RHP Jack Flaherty, on the 10-day IL since Aug. 25 with a right shoulder strain, threw about 15 pitches to teammates in a simulated game. “He looked like Jack. So we’ll see how he recovers and we’ll evaluate what the next step is,” Shildt said.

Brewers: LHP Brett Anderson, on the IL since Sept. 2 after being struck in the pitching shoulder by a line drive, is scheduled to be activated and start Wednesday’s game against St. Louis. … Cain was not in the starting lineup for the third consecutive game. Cain came out of Saturday’s game with a sore groin after crashing into the wall on a sensational catch. Cain pinch-hit in the seventh and remained in center field.

OF Tyrone Taylor was reinstated from the 10-day injured list. RHP Miguel Sanchez was optioned to Triple-A Nashville.

Cardinals: RHP Miles Mikolas (1-2, 4.50) starts the third game of the series on Wednesday. Mikolas allowed three hits in 5 2/3 scoreless innings in his last start for his first victory since 2019.

Brewers: LHP Brett Anderson (4-8, 4.18) is scheduled to come off the IL for his first start since Sept. 1. Counsell said Anderson was likely to make a short start, followed by the bullpen.

Denial of responsibility! NewsConcerns is an automatic aggregator of the all world’s media. In each content, the hyperlink to the primary source is specified. All trademarks belong to their rightful owners, all materials to their authors. If you are the owner of the content and do not want us to publish your materials, please contact us by email – [email protected]. The content will be deleted within 24 hours.
Athlete healthAthlete injuriesBaseballBrandon WoodruffChristian YelichCraig CounsellDan VogelbachGiovanny Gallegos
0
Share

Mathematicians discover music really can be infectious – like a virus | Science