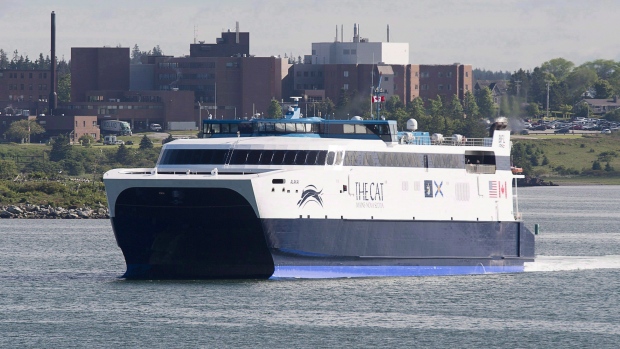 HALIFAX —
An international ferry service that links Canada with the United States is set to resume next year after being cancelled three years in a row.

An update on the Bay Ferries Ltd. website said its high-speed catamaran ferry service between Yarmouth, N.S., and Bar Harbor, Maine, is expected to start in the spring of 2022.

The last two seasons were cancelled due to the COVID-19 pandemic, while the 2019 season was scrapped due to ongoing construction at the Bar Harbor terminal.

Bay Ferries, operator of the provincially subsidized ferry service, announced in 2018 plans to relocate its U.S entry point from Portland, Maine, to Bar Harbor, a route that operated for more than half a century before ending in 2009 when the Nova Scotia government briefly eliminated an annual subsidy.

Yarmouth Mayor Pam Mood said the local ferry terminal has been upgraded in anticipation of the upcoming season, which is expected to run from May to October.

“It was a complete overhaul to the terminal itself as well as to the Canadian border services here,” she said in an interview.

The southwestern Nova Scotia port town relies heavily on tourism and the economic spinoffs generated by the catamaran ferry service, known locally as The Cat.

“The fishery is our mainstay followed closely by tourism,” Mood said, noting that the ferry helps support the region’s restaurant and hospitality sector, small businesses and gas stations.

“This is a livelihood here that relies on the ferry.”

Governments of all stripes in Nova Scotia have spent millions of dollars to keep the ferry service to the U.S. afloat in recent years.

In February, Bay Ferries was ordered to release the management fees it receives from the Nova Scotia government.

The private ferry operator said under a deal dated April 1, 2018, it is paid $97,500 per month by the provincial government, equalling $1.17 million annually.

The release of the information was the result of a Nova Scotia Supreme Court case launched by then-Progressive Conservative Leader and current Premier Tim Houston.

“Nova Scotia taxpayers have paid at least $3.5 million to Bay Ferries over the last three years for a ferry that has not carried a single passenger,” Houston said in a news release at the time.

The province has a contract with Bay Ferries through to 2025.

Nova Scotia had originally budgeted $16.3 million for the 2020 sailing season.

This report by The Canadian Press was first published Oct. 3, 2021.

Denial of responsibility! NewsConcerns is an automatic aggregator of the all world’s media. In each content, the hyperlink to the primary source is specified. All trademarks belong to their rightful owners, all materials to their authors. If you are the owner of the content and do not want us to publish your materials, please contact us by email – admin@newsconcerns.com. The content will be deleted within 24 hours.
cape bretoncharlottetowncoronavirus canadacovid 19 canadacovid 19 nova scotiacovid nova scotiaCOVID-19fredericton
0
Share