Canada falls 1-0 against U.S. during 2nd day of softball at Tokyo Olympics – National 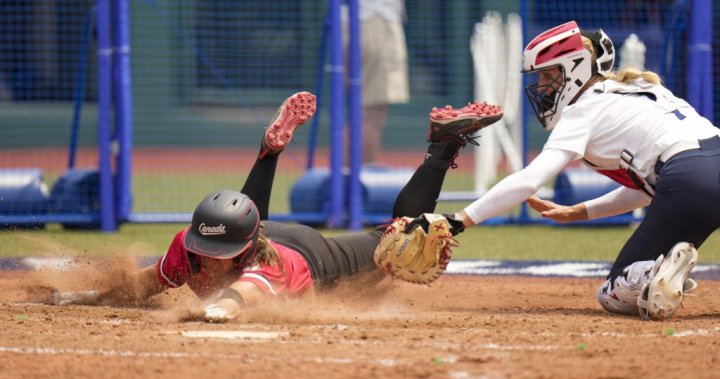 Canada’s softball team was unable to get a repeat win on Thursday during the second day of competition at the Tokyo Olympics, falling 1-0 against the United States.

The tough battle saw Canada let in just one run in the fifth inning, while U.S. pitcher Monica Abbott proved to be a formidable challenge the Canadian team just couldn’t get past.

Canadian starter Sara Groenewegen pitched two shutout innings, allowing three hits, striking out four and walking one batter, while also supplying Canada’s only hit of the game as a pinch-hitter in the sixth inning.

Canada threatened in the bottom of the sixth but couldn’t come through with the tying run.

Jen Gilbert was walked to lead off the inning before Groenewegen followed with a double to right field. Pinch-runner Joey Lye attempted to score from first on the play but was tossed out at home plate.

Abbott struck out nine Canadian batters while giving up just the lone hit and three walks.

Caira took over in the third and went 2 2/3 innings, allowing three hits, one earned run with two strikeouts for the loss.

The U.S. marked its second win after defeating Italy 2-0 the day before. Canada won its opening game Wednesday 4-0 against Italy.

The Canadians will face Australia next on Saturday.

Coach Mark Smith has expressed confidence in his team going all the way in these Olympics, which are the first to feature baseball since 2008.

“We’ve got a wonderful mix of youth and experience, a great chemistry, a championship culture, women who are highly committed to their craft,” he told Global News.

“We’re going to win a gold medal. Whether that happens or not remains to be seen, but that’s our intention.”

Canada is the only team out of five that have played in each of the four Olympics tournaments to have never won a medal.

All six teams face each other once over six days before the top four advance to the medal games. The first two days are at a baseball stadium in Fukushima, a region badly affected by the 2011 tsunami and nuclear disaster.

The Canada-U.S. meet-up will be followed by matches between Mexico and Japan, and Italy versus Australia later Thursday.

–With files from the Associated Press

Denial of responsibility! NewsConcerns is an automatic aggregator of the all world’s media. In each content, the hyperlink to the primary source is specified. All trademarks belong to their rightful owners, all materials to their authors. If you are the owner of the content and do not want us to publish your materials, please contact us by email – [email protected]. The content will be deleted within 24 hours.
2020 OlympicsCanadaOlympicsOlympics 2021olympics resultsSportsSummer Olympicssummer olympics 2021
0 9
Share

Giannis Antetokounmpo and the virtue of being oneself

Giannis Antetokounmpo and the virtue of being oneself

Between stimulus checks, expanded tax credits, how much you could get

21 Vacation Dresses to Get You in the Summer Mood