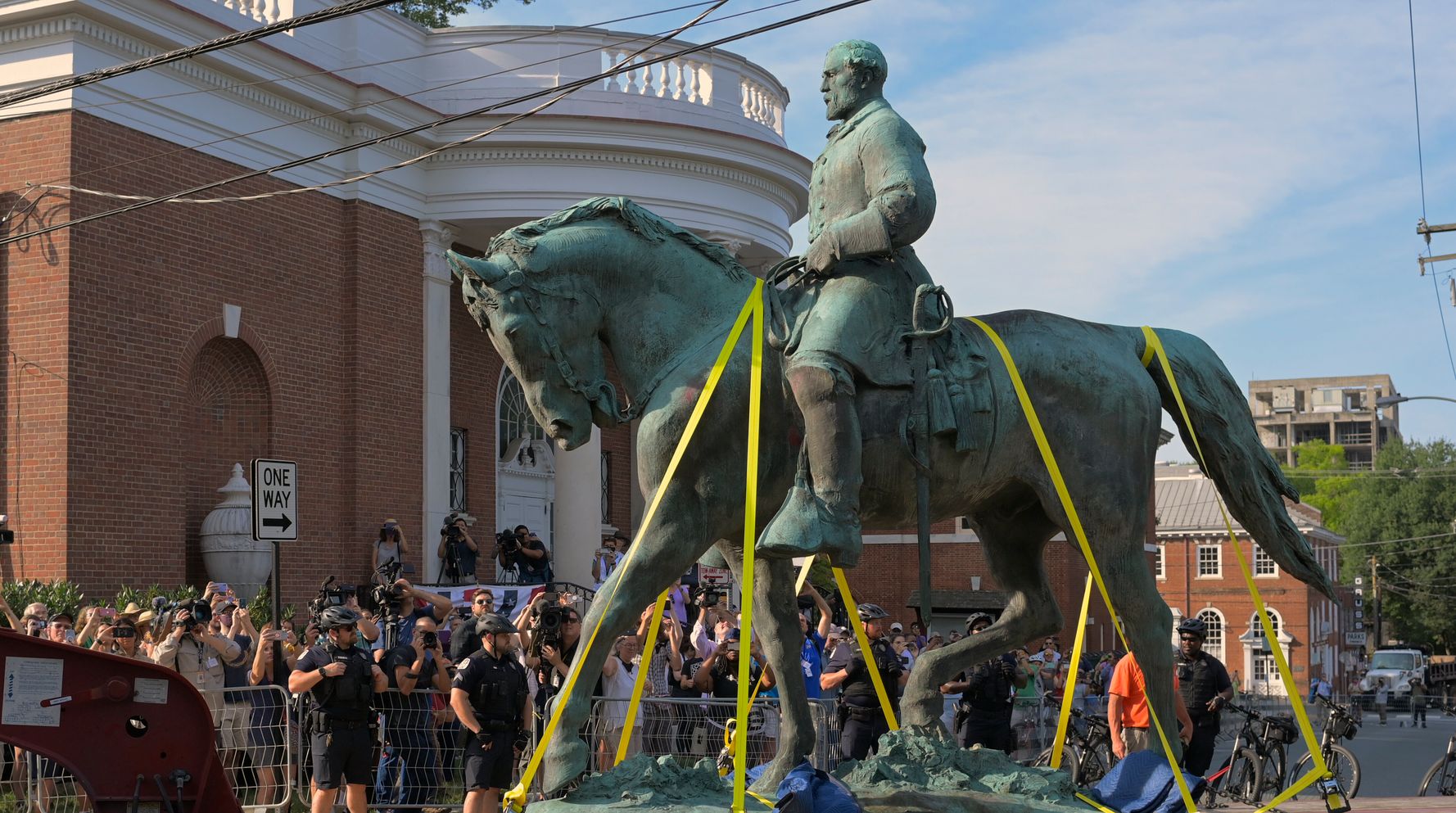 A Black heritage center in Charlottesville, Virginia, wants to melt down the city’s recently removed statue of Confederate Gen. Robert E. Lee so that it can be repurposed into public art.

The Jefferson School African American Heritage Center (JSAAHC) submitted a proposal to the city on Friday to take ownership of the statue, which was the focal point of a deadly white supremacist rally in 2017. The city removed the statue from a public park earlier this year.

The JSAAHC wishes to disassemble the statue of Lee — who during the Civil War led the Confederate Army’s losing campaign to preserve the institution of slavery — so that it can be taken to a foundry, melted down, and then given to an artist-in-residence, according to a statement released Monday.

The artist, after receiving input from the descendants of enslaved persons, would then turn the statue’s bronze material into a new piece of art that would be offered to the city of Charlottesville for public display.

The proposal is “Charlottesville’s opportunity to lead by creating a road map that can be followed by other communities that wish to impact history,” JSAAHC Executive Director Dr. Andrea Douglas said in a statement. “It’s our hope that our entire community will embrace this defining moment.”

JSAAHC is among at least 32 groups or individuals interested in taking ownership of the Lee statue, or a statue of Confederate Gen. Thomas “Stonewall” Jackson. The city removed both earlier this year amid an ongoing national reckoning over the more than 2,000 memorials valorizing the Confederacy, most erected decades after the Civil War as part of a campaign to terrorize Black Americans.

Charlottesville’s Lee statue was erected in 1924 in a park that was then whites-only. Its arrival in the city coincided with a festival honoring the Confederacy, which local chapters of the Ku Klux Klan celebrated by holding a cross burning and marching by the thousands through downtown.

The Charlottesville City Council voted to remove the Lee statue in early 2017 but a local judge issued an injunction preventing its removal. White supremacists, buoyed by the rise of former President Donald Trump and angered over the city’s attempt to topple the statue, held a series of rallies in Charlottesville that summer, culminating with the deadly “Unite the Right” rally in August during which a neo-Nazi driving his car into a crowd of counterprotesters, killing 32-year-old Heather Heyer and injuring 19 others. (A lawsuit against the organizers of the rally goes to trial next week.)

This April, the Virginia Supreme Court, citing a new state law, ruled that Charlottesville could remove its Confederate statues. In July, the city removed Lee from his pedestal and lowered him onto the back of a truck, which then drove out of Market Street Park (formerly Emancipation Park and Lee Park before that).

The city council will now sort through the proposals of what to do with the statue. The council’s guidelines for the selection process all but ensure that no neo-Confederate groups will take hold of the monument.

“The recontextualization needs to be done clearly and unambiguously indicating the rejection of the Jim Crow-era narratives that dominated when the statues were erected,” the guidelines state. “New design that deemphasizes the centrality of the sculpture and counters the Lost Cause narratives could achieve transformation of both space and narrative.”

According to a report in Charlottesville Tomorrow, at least one neo-Confederate group, the Sons of Confederate Veterans, told the city it is interested in the statue.

Other individual Confederate sympathizers have also thrown their hats in the ring. “The Confederate statues being removed from sight should come to Texas where we will give them a place of honor to be viewed by all patriots who wish to keep our heritage strong,” a man named Ed Atkinson wrote in a letter to the city earlier this year. “Your leaders, your city has no honor and does not deserve a place of heritage in history.”

Other applicants include historical organizations and museums across the country, including the Jim Crow Museum of Racist Memorabilia in Michigan.

The JSAAHC — a Charlottesville-based nonprofit organization founded in 2013 that offers interdisciplinary programming designed to promote “a greater appreciation for and understanding of, the contributions of African Americans and peoples of the Diaspora,” according to its website — says it has already raised $500,000 in funding commitments toward its proposal.

Denial of responsibility! NewsConcerns is an automatic aggregator of the all world’s media. In each content, the hyperlink to the primary source is specified. All trademarks belong to their rightful owners, all materials to their authors. If you are the owner of the content and do not want us to publish your materials, please contact us by email – admin@newsconcerns.com. The content will be deleted within 24 hours.
charlottesvilleconfederate statuesrobert e. leeVirginia
0
Share

All the Details on Kourtney Kardashian’s Gorgeous Engagement Ring