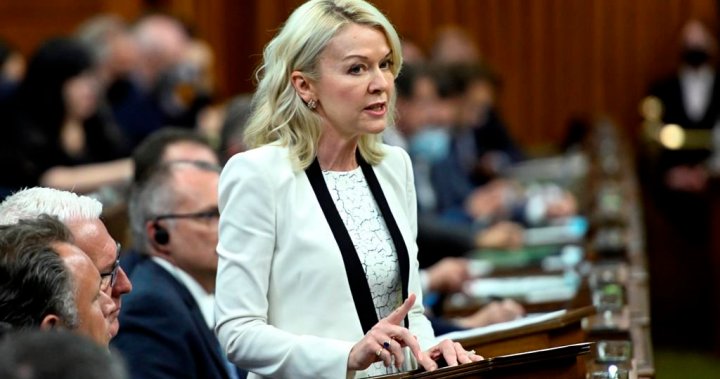 By David Fraser and Stephanie Taylor

Evidence submitted at a public inquiry suggests the Conservative party’s former interim leader, Candice Bergen, privately expressed concerns about engaging with protesters from the “Freedom Convoy” last winter despite publicly urging the prime minister to do just that.

A summary of interviews with Prime Minister Justin Trudeau’s senior aides that was presented to the inquiry says the leaders discussed reaching out to protest organizers in a Feb. 3 phone call after chief of staff Katie Telford asked whether Bergen could help.

The document says that in the call, Bergen acknowledged “significant concerns” about whom the federal government could speak to within the demonstration and “setting a bad precedent.”

Bergen had taken over the job one day earlier, after former leader Erin O’Toole had been ousted from the Conservative caucus, and publicly berated Trudeau in the House of Commons on the same day as the call for not offering an “olive branch” to the protesters.

Bergen and current Conservative Leader Pierre Poilievre’s office did not immediately respond to requests for comment.

Trudeau’s senior staff appeared on the second-last day of public hearings held by the commission, which is probing the federal government’s decision to invoke the Emergencies Act on Feb. 14 in response to the downtown Ottawa protests and Canada-U.S. border blockades.

Denial of responsibility! NewsConcerns is an automatic aggregator of the all world’s media. In each content, the hyperlink to the primary source is specified. All trademarks belong to their rightful owners, all materials to their authors. If you are the owner of the content and do not want us to publish your materials, please contact us by email – admin@newsconcerns.com. The content will be deleted within 24 hours.
CanadaCandice BergenConservativesconvoy to Ottawaconvoy to ottawa 2022Emergencies ActEmergencies Act inquiryFreedom Convoy
0
Share

‘Beyond my comprehension’: Murder victim’s brother haunted by lonely death