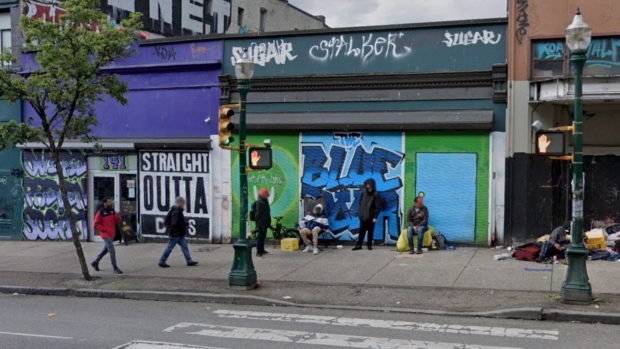 The B.C. government is attempting to seize millions of dollars’ worth of real estate that officials allege was purchased with proceeds from an unlicensed cannabis shop in Vancouver’s Downtown Eastside.

Among them is the East Hastings Street building that for years housed a pot shop known as the Blue Door, which offered cheaper access to cannabis than legal sources.

“The defendants have operated or facilitated the operation of an illegal cannabis retail store,” the lawsuit reads. “None of the defendants have had a valid licence or authorization to produce, posses for the purpose of sale, market, distribute or sell cannabis or cannabis products to any person or entity.”

The Blue Door shut down earlier this year after being raided by police, prompting a wave of disappointment from regular customers who described it on social media as a “critical lifeline” for neighbourhood residents living in poverty. The dispensary sold grams of cannabis for about half the average price of legal sources.

The dispensary was operated by the Real Compassion Society, which is also listed as a defendant in the lawsuit. Shannon Bauman is the society’s director, a role formerly held by her husband, according to the civil forfeiture claim, which was filed last week in B.C. Supreme Court.

The province alleges the Baumans started using cash from the business to purchase real estate in 2015, including a West Vancouver home with an assessed value of $4.1 million.

The former site of the Blue Door and a neighbouring property on Hastings Street currently occupied by the Overdose Prevention Society are assessed at around $1.45 million each.

The Baumans have yet to file a statement of defence in the case, and CTV News has been unable to reach the couple to comment on the civil forfeiture claim.

According to the government’s lawsuit, when police raided the Blue Door back in February, they found more than 500 pounds of dried cannabis in Ziploc bags and $48,227 in cash, some of which came from 20-litre buckets of loose change.

Neither of the Baumans has been criminally charged. Online court records show Shannon Bauman was fined for operating a business without a licence in August.

B.C.’s civil forfeiture office was set up in 2006 to seize assets believed to be connected to illegal activity, regardless of whether the owner has ever been convicted – or even charged – with a crime. The process uses civil proceedings, which have a lower standard of proof than criminal trials.

The process has been the subject of controversy and criticism over the years, including from the B.C. Civil Liberties Association, which accused the province of using civil forfeiture to circumvent due process.