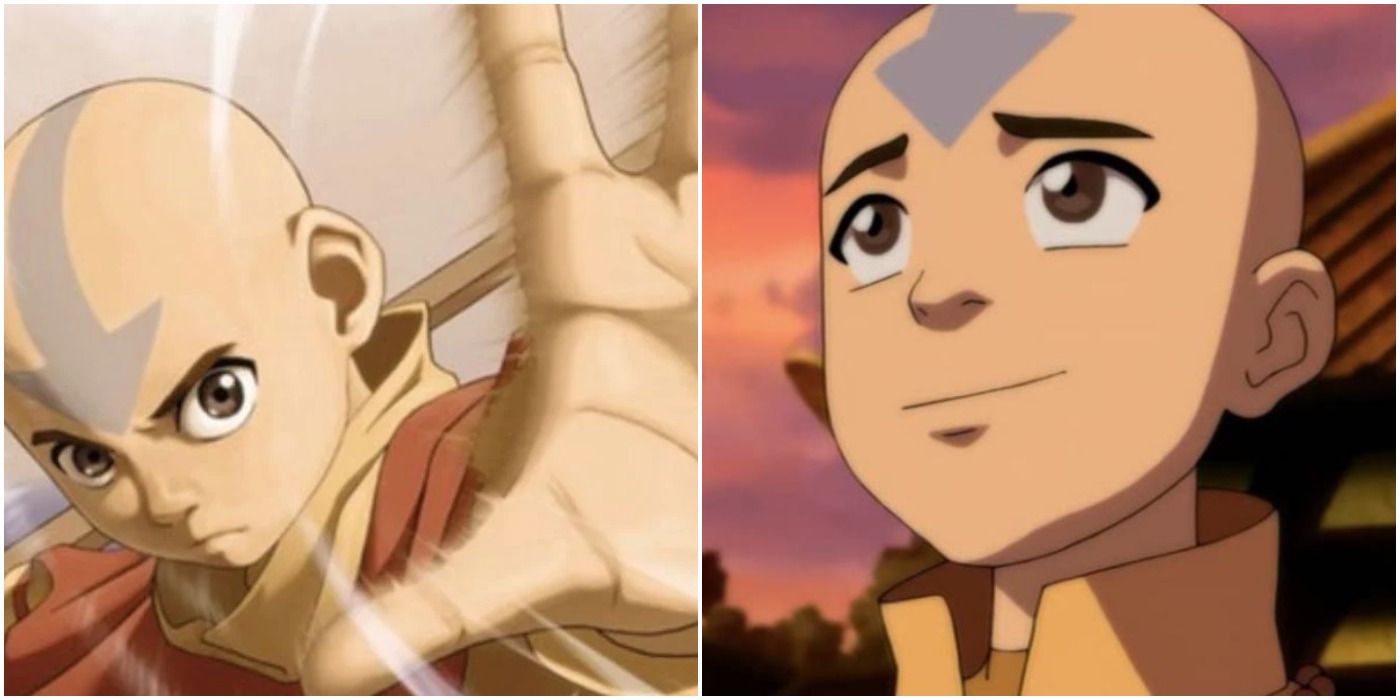 Avatar: The Last Airbender‘s star is Avatar Aang, who is indeed the last of the Air Nomads and the last true hope of ending the Hundred-Year War and restoring peace and balance to the world. He’s just a boy of twelve years, but he already carries a massive burden, and he undergoes many changes as a fighter and as a person during this great journey.

RELATED: The Legend of Korra: 5 Ways Korra Changed (& 5 She Stayed The Same)

Aang has covered a lot of ground ever since he broke free of that iceberg in the Southern Water Tribe, and the world is a very different place than the one he left behind. The world has changed, and he must change too, including on the inside. He didn’t remain a naive and goofy kid for long; he soon transformed into a true hero, but he didn’t lose himself along the way.

10 HOW AANG CHANGED: His Relationship To The Fire Nation

As the Avatar, Aang can have relationships to entire nations, not just to people, and he changed his relationship to the mighty Fire Nation twice. In his original era, Aang was on friendly terms with this country, having friends there such as Kuzon. Back then, fire was nothing to fear.

Aang soon learned that the Fire Nation was his #1 enemy in this new era, and he had no choice but to fight. Fortunately, he restored the peace, and he and the Fire Nation were on friendly terms. He and his successor, Korra, can now journey to that fiery land in peace, as a friend.

9 HOW AANG DIDN’T CHANGE: His Principle Against Taking Lives

The Air Nomads had many principles and rules for a pious life, and one of them is to never take the life of other living things for any reason. Airbending reflects that, allowing a bender to drive away a hostile animal or person without injuring them, or allowing the bender to escape before any blood is shed.

Aang takes all this seriously, and he won’t take any lives if he can help it. He didn’t even want to kill Fire Lord Ozai, to the exasperation of both Sokka and Zuko. Fortunately, Aang found a way to defeat Ozai without taking his life or even breaking any bones.

Aang is just a kid, and he’s not afraid to act like it at times. When he first appeared, Aang had a rather short attention span for a monk, and he loved to run off and pursue fun things, even if someone was talking to him. He might cut someone off mid-sentence.

Earlier in the series, Aang was often like this, to the point of getting himself or his entire party into trouble because he just had to check out every interesting thing he came across during his travels. He later learned to rein in these impulses somewhat, and stay more focused on the mission.

7 HOW AANG DIDN’T CHANGE: His Affinity For Waterbending

Aang was a native Airbender, but in style and philosophy, water is fairly similar to air, being a flexible and defensive element that rewards creative thinking. Water isn’t quite as detached and light as air, but it’s close enough, and Aang learned waterbending with astonishing speed.

Aang was eventually comfortable with all four elements, but he favored water almost as much as his native element. By the time he met Pakku of the White Lotus for more training, he didn’t have much left to learn. Soon, he was ready to switch to earthbending training.

6 HOW AANG CHANGED: His Facial Hair

In the original series, the Gaang members were too young for a full beard, though Sokka was once seen shaving some modest fuzz off his upper lip one morning. Aang’s head was hairless aside from his eyebrows, but later in life, he decided to dive into the world of men’s grooming.

As a grown man, Aang had a chinstrap beard, and this doesn’t contradict Air Nomad teachings. Air Nomad men must shave their heads bald, but beards are acceptable, and Aang’s new look was a solid one. That’s how he looked when his Avatar spirit met Korra, at least.

5 HOW AANG DIDN’T CHANGE: His Preference For Diplomacy & Cooperation

Aang knows that as the Avatar and guardian of world peace, he must sometimes fight his enemies, but that is almost never his first option when a situation goes south. During moments of great distress or anger, Aang might get violent right away, but that’s the exception.

By default, Aang favors diplomacy, negotiation and compromise, to ensure that all parties can gain something without needing to fight or take advantage of one another. That satisfies Aang both as an Air Nomad and the Avatar.

4 HOW AANG CHANGED: His Relationship To Zuko

Aang wished that he and Zuko could have been friends, and after the failed Fire Nation invasion, he got his wish. Zuko realized his true destiny to aid the Avatar, and the two of them became allies against Ozai and Azula. That friendship endured for many years in the future, too.

Aang is the sole surviving Air Nomad, and he knows that Air Nomad culture will die with him if he doesn’t do something quickly. He did his best to preserve this way of life, such as at the Northern Air Temple, and in the comics, he recruited the Air Acolytes to aid him in this quest.

Aang moved on from his original era, but he won’t let his culture just fade away like that. He eventually had an Airbender son, Tenzin, who was taught everything Aang knew so the Air Nomad way of life would survive after Aang’s eventual death. And it worked.

2 HOW AANG CHANGED: His Appreciation Of Earthbending & Firebending

Aang had an easy time learning waterbending, but firebending required a very different mentality, and earthbending is airbending’s absolute opposite. Aang struggled to learn them, and for a time, he didn’t seem to want to, outside of his Avatar duty. He saw fire as a monster, and earth as something irrelevant to his style.

Aang changed his view on both elements when he met master benders for each. Bumi and Toph taught him to become stubborn and firm like the earth itself, and the twin dragons and sun warriors taught Aang that fire is the element of life and energy, not just destruction.

1 HOW AANG DIDN’T CHANGE: His Fondness For Disguises

During the war, Aang often had to operate while in disguise, since his bald head, Airbender tattoos and monk robes gave him away as an Air Nomad and thus, the Avatar. Throughout the series, Aang wore many disguises, even passing himself as an old man. Chronologically, he really is one.

Aang didn’t mind all these disguises. In fact, he seemed to have fun with them, and he enjoyed attending a Fire Nation school while disguised as a student, using the uniform’s fabric belt as a headband to hide his forehead tattoo. He was reluctant to leave.

Next: Avatar: 10 Things Aang Can Do Without His Bending


Next
My Hero Academia: 10 Harsh Realities Of Not Having A Quirk


Louis Kemner has been a fan of Japanese animation since 1997, when he discovered Pokemon and Dragon Ball Z in elementary school. Now he’s a bigger anime/manga fan than ever, and is ready to share what he knows with readers worldwide. He graduated high school in 2009 and received his Bachelor’s in creative writing from UMKC in 2013, then put his skills to work in 2019 with CBR.com. He’s always looking for a wonderful new anime to watch or manga series to read. You can reach him at [email protected]

The Thing Board Game Returns This Fall

There is a leadership vacuum in Infosys, time to get Nandan Nilekani back: Mohandas Pai

Schools get the brunt of latest COVID wave in South Carolina