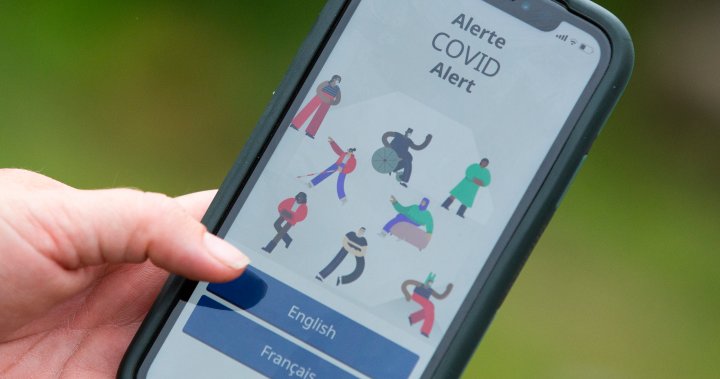 In the early days of the pandemic, before anyone had their first vaccine, the federal government’s COVID Alert app was promoted as an important tool the country could use to help fight the spread of the virus.

“This is literally a tool in your pocket to fight this virus,” Prime Minister Justin Trudeau said in November 2020.

“Download the COVID Alert app. It’s easy. It’s free. It will help you do your part to protect your friends and loved ones,” he said in October 2020.

But the app never seemed to find its footing as part of the anti-COVID-19 arsenal Canadians were prepared to adopt. Though more than 6.7 million of the 30 million smartphones in Canada have the app installed, new data obtained by Global News show that its use has declined significantly through 2021.

Global News has also learned that attempts by the federal government to build in some new functionality were abandoned largely because the needed provincial partners shrugged their shoulders in disinterest at the idea of employing any resources to improve the app.

The premise of the app was a relatively simple one. When people are near each other, their phones would exchange and record anonymous numeric codes so that if a person using the app ever became sick with COVID-19, an alert could be sent to every phone that had recorded being near that phone and the phone’s owner could take appropriate health precautions.

To be able to send an alert, an infected user must obtain a one-time special code from a provincial health authority.

Nonetheless, the federal government spent heavily to promote its use. Health Canada said this month that it had spent about $12.6 million on TV, radio and online ads since April. Add in about $3.5 million used to develop the app as well as earlier spending on marketing and the overall cost of the app is north of $20 million.

With the ad spending, app use appeared to strengthen.

In April 2021, 6,800 app users entered the one-time code to tell their app that they’d been infected. That, in turn, prompted 35,000 notifications to be sent to other users that they had been in close contact with an infected person.

But in November, the latest month for which Health Canada has provided data to Global News, just 869 infected users punched in their one-time code, which in turn generated 11,000 notifications.

Before those numbers declined, though, back in the early spring, Health Canada considered building in some new functionality to the app, which it hoped would do two things: help stem the spread of the virus and improve the uptake of the app.

“The discussion was: we have this app — how can we maximize its functionality? How can we use this app to really support the overall public health response?” said Carole Piovesan, the co-chair of the COVID-19 Exposure Notification App Advisory Council, a group of health, technology and privacy experts convened to provide outside advice to Health Canada about the app. Piovesan is the partner and founder of INQ Law, a Toronto-based firm that specializes in cyber-security, data protection and privacy issues.

The new feature propoosed in the spring involved integrating the app with a QR code scanner. The idea would be that restaurants, theatres, arenas or any other public venue would display a QR code at the entrance. An Alert app user would scan that QR code upon entry.

Then, if a COVID-19 outbreak was ever associated with that venue, an individual who had been in the venue could be anonymously alerted and, once again, take appropriate health precautions.

This, privacy advocates thought, would be a significant improvement over the ad hoc system many restaurants, for example, were using in which they’d ask each patron for a name and telephone number.

“Going into a restaurant or a shop where they ask for your contact information for the purposes of contact tracing and then you find yourself disclosing your name and phone number to anyone who’s standing near you,” Piovesan said. “Whereas with the QR code, you could scan it and it would be a very quiet, privacy-preserving way to have your some of your information — at least the fact that you’ve entered — documented somewhere.”

20 million Canadians still don’t have full access to the COVID Alert app. Why?

Earlier this month, the federal government published the results of some public opinion research it commissioned from Ottawa-based consultancy Earnscliffe Strategy to see how the public might respond to the QR code-scanning idea.

Earnscliffe, which was paid about $75,000 for the consulting work, designed a series of polls in which it found about 60 per cent of the country supported the idea of adding QR code scans into the app. Nearly half — 48 per cent — said such a feature would increase their use of the app and about the same — 49 per cent — thought it would help contain the spread of the virus.

Armed with the Earnscliffe study, which was produced about mid-summer, Health Canada approached the provinces to see if they were interested but learned the provinces did not think much of the idea and so, the idea was dropped. A Health Canada spokesperson said earlier this month that, at this time, no additional features are being considered for the COVID Alert app. And Ottawa has no plans to renew negotiations to bring on the provinces and territories that never signed on to the app’s use.

Piovesan, for her part, remains an advocate of the app — and of its continued development.

“It’s not the only tool and it was never presented as the only tool or the main tool in the public health roster of tools but it is definitely something that can be used and it can be very effective,” she said.” But we do have to look at the life cycle and make sure people are adopting it.””

For now, the COVID Alert app lingers on. It has been weeks since Trudeau or any federal official has promoted or even mentioned its use. The TV ad campaign has ended. And the advisory council, which met 15 times between August of 2020 and earlier this spring, has not met since May 26.

But, as of Dec. 6, the app has been downloaded 6,784,430 times, each download a signal from someone, its advocates hope, that they’re willing to use the smartphone as a shield against the spread of COVID-19.

Denial of responsibility! NewsConcerns is an automatic aggregator of the all world’s media. In each content, the hyperlink to the primary source is specified. All trademarks belong to their rightful owners, all materials to their authors. If you are the owner of the content and do not want us to publish your materials, please contact us by email – admin@newsconcerns.com. The content will be deleted within 24 hours.
alert appCOVIDCOVID-19COVID-19 alert appCOVID-AlertHealthHealth CanadaPandemic
0
Share