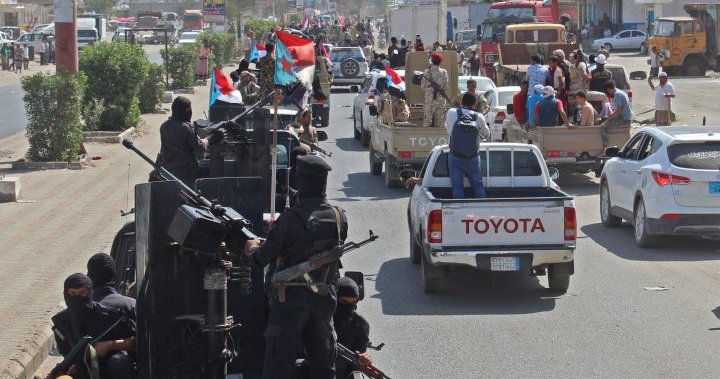 A missile and drone attack on a key military base in Yemen‘s south on Sunday killed at least 30 troops, a Yemeni military spokesman said. It was one of the deadliest attacks in the country’s civil war in recent years.

Mohammed al-Naqib, spokesman for Yemen’s southern forces, told The Associated Press the attack on Al-Anad Air Base in the province of Lahj wounded at least 65. He said the casualty toll could rise since rescue teams were still clearing the site.

Graphic footage from the scene showed several charred bodies on the ground with ambulance sirens blaring in the background.

Yemeni officials said at least three explosions took place at the air base, which is held by the internationally recognized government. No one immediately claimed responsibility for the attack.

Yemen has been embroiled in a civil war since 2014, when Houthi rebels swept across much of the north and seized the capital, Sanaa, forcing the internationally recognized government into exile. The Saudi-led coalition entered the war the following year on the side of the government.

A ballistic missile landed in the base’s training area, where dozens of troops were doing morning exercises, the officials said. Medics described a chaotic scene following the explosions, with soldiers carrying their wounded colleagues to safety fearing another attack.

The officials blamed the Houthis for the attack on the base, once the site of U.S. intelligence operations against al-Qaida’s powerful Yemeni affiliate. The officials spoke on condition of anonymity because they were not authorized to brief media.

The military spokesman for the Houthis did not confirm or deny the attack, which carried the hallmarks of the Iranian-backed rebels. The Houthis have previously launched similar attacks, including one by a bomb-laden drone on the Al-Anad in January 2019 that killed six troops.

The Houthis had seized the base in the months after their 2014 takeover of Sanaa, before government forces reclaimed it during the battle to reverse the gains of the rebels.

Denial of responsibility! NewsConcerns is an automatic aggregator of the all world’s media. In each content, the hyperlink to the primary source is specified. All trademarks belong to their rightful owners, all materials to their authors. If you are the owner of the content and do not want us to publish your materials, please contact us by email – admin@newsconcerns.com. The content will be deleted within 24 hours.
Al-Anad Air Basewar in YemenWorldYemenyemen civil waryemen houthi rebelsyemen houthisYemen military base attacked
0
Share

Saints Row Reboot Confirms the Return of a Fan-Favorite Feature

The team was all out for 24 runs, the match ended in just 16 balls