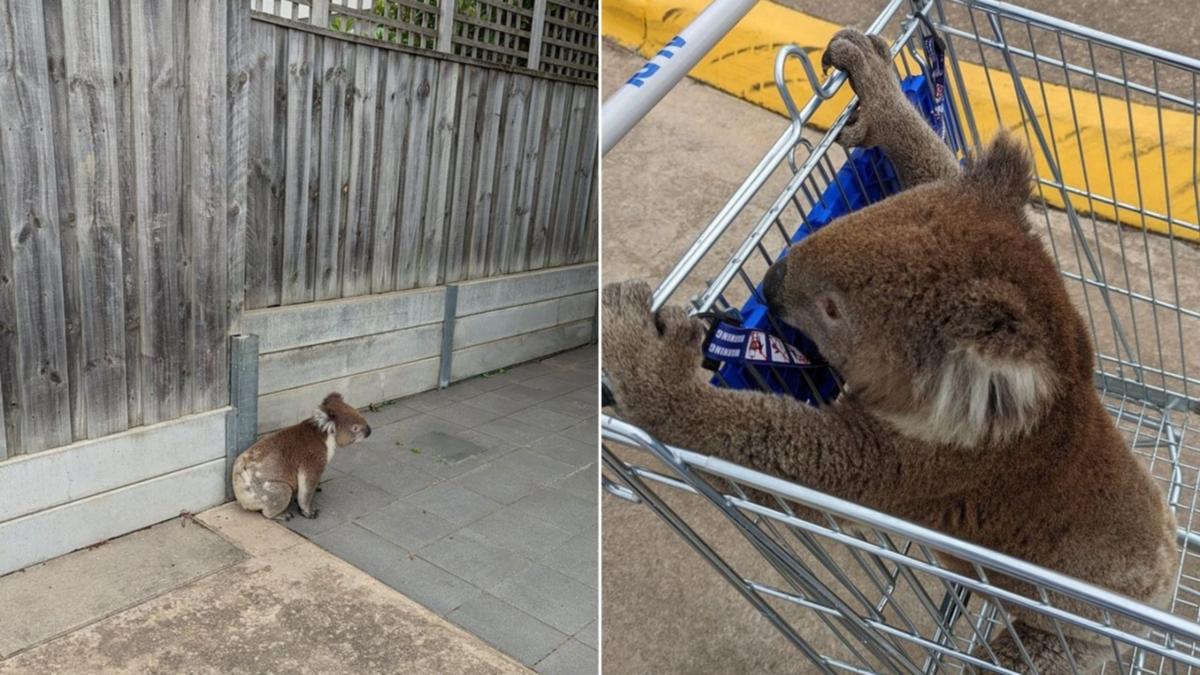 An ALDI shopper has revealed the heartwarming story behind a viral TikTok which showed him pushing a koala in a supermarket trolley.

Speaking to 7NEWS.com.au, Peter Elmore from Hastings, Victoria, revealed how he and his wife, Kelly, were on holiday in Portland when he visited the town’s local ALDI store.

Watch the viral footage of Peter with a koala above

But his Saturday supermarket run turned into an animal rescue mission when he entered the ALDI carpark and he noticed that a koala had become trapped.

“There was only one way in and out of the carpark, and the koala was cornered,” he told 7NEWS.com.au.

“She was trying to climb the high wooden fence and kept falling. And because koalas can’t put their arms out to protect themselves when they fall, she kept landing on her head and bashing her face.

“Then I saw an elderly man nearly run over her and I knew I had to get her out of there.”

Peter says he and his wife are wildlife volunteers and have experience with rescuing koalas, and that he was only too happy to step in.

“We have a few koalas around where we live, so I’ve done it before,” he said.

But what made this rescue a little different was that Peter had an ALDI trolley on hand to transport her.

“I would’ve put her in the back of my car, but I had my dog with me,” he explained.

“And I would’ve carried her, but then I saw the ALDI trolley and thought that would be a bit easier!

“She was very happy to be picked up and rescued.

“Male koalas can be a little more feisty, but she was relaxed in the trolley and was happy for me to move her around.

“I only had to push her about 100 metres until we got to a bit of bushland. Then she went into someone’s backyard and up a tree.

“It was a happy ending.”

Peter said he was amused by the TikTok video of the rescue, which had been filmed by a stranger.

“I didn’t even know I’d been photographed until I saw the video!” he said.

“I can see that it would’ve looked a little unusual.

“But the trolley was just there to help out the koala, it was very handy!”

Denial of responsibility! NewsConcerns is an automatic aggregator of the all world’s media. In each content, the hyperlink to the primary source is specified. All trademarks belong to their rightful owners, all materials to their authors. If you are the owner of the content and do not want us to publish your materials, please contact us by email – admin@newsconcerns.com. The content will be deleted within 24 hours.
ALDIAnimalsLifestyleNewsshoppingSupermarkets
0
Share

Yellowjackets: How a teen cannibalism soap could finally kill off the Netflix binge model

India to provide assistance to the families of two Indians killed in UAE: Envoy