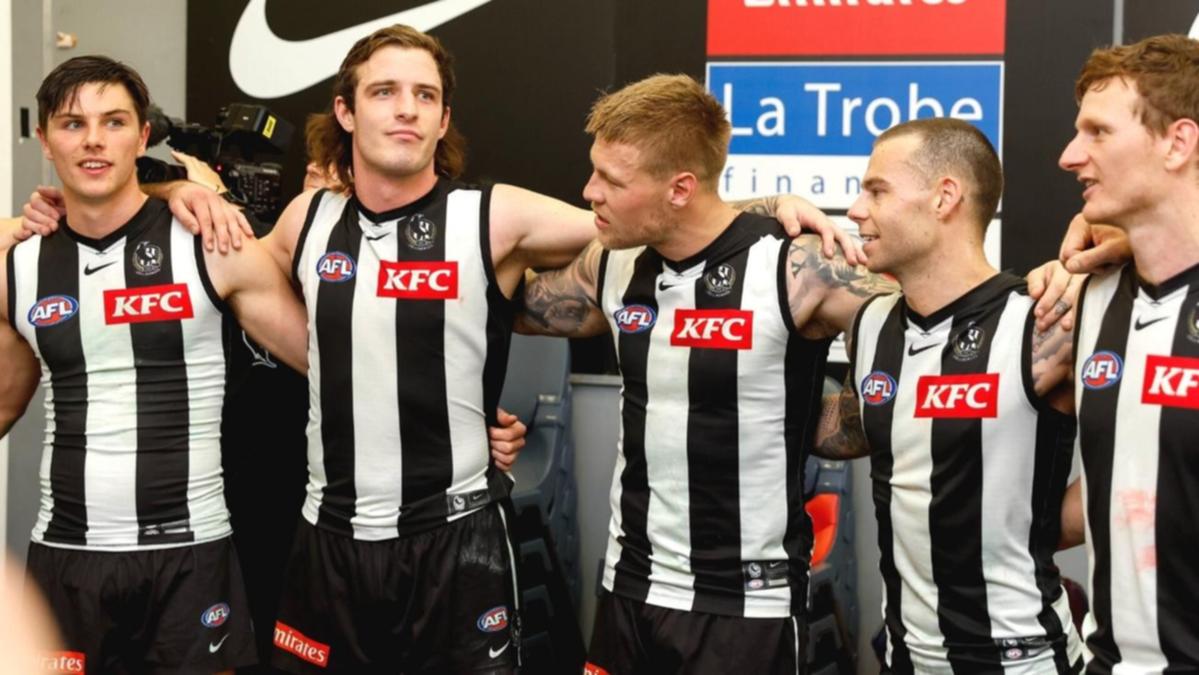 Colingwood superstar Jordan De Goey has been ruled out of Saturday’s AFL clash with North Melbourne.

De Goey pulled up lame from training on Thursday with a tight quad, and was in a race against time to be fit for the weekend, but the Magpies released a statement revealing the early call on Friday morning.

In the video above: Clarko meets with Giants

“The 26-year-old had a scan yesterday after experiencing quad soreness during training,” the statement read.

“De Goey will be assessed further next week but, at this stage, he looks (set) to miss 2–3 games.”

The statement also revealed an injury to a key defender.

“In other injury news, defender Jack Madgen will have surgery to repair his fractured thumb,” it said.

“Madgen injured his thumb during a training drill yesterday and is expected to miss up to six weeks.”

7NEWS reporter Mitch Cleary revealed on Thursday that Josh Carmichael or Finlay Macrae were in the frame for selection should De Goey fail to get up for the game, and Collingwood later confirmed that Carmichael would make his debut.

Carmichael’s selection completes a stunning rise from country footy to the AFL; the former table tennis star was playing in the bush this time last year, before being picked up in the SANFL where he played half a year, and was then drafted in the mid-season rookie draft.

Meanwhile, Collingwood key defender Darcy Moore has failed in his unlikely bid to be ready for Saturday’s clash.

The fact he was able to press for selection only a few days after his knee injury highlighted a mixed bag of news on Thursday for the Magpies.

Jeremy Howe (illness) will return after missing a game, and is the obvious replacement for Moore.

There were fears that Moore had ruptured an ACL when he was hurt in last week’s tight win over Gold Coast.

But the star defender was cleared of structural damage, and he went close to proving his fitness for Saturday’s game.

“He didn’t quite get through the session, so we’ll just assess that and fingers crossed he’s available for next week,” McRae said.

“He was reasonably close – about 80 per cent … we’ll let him have the weekend off to get better and progress towards next week.

“It looks like a Howe for Moore replacement. He (Howe) is such an integral part of what we do and sets us really well.

“It would be nice to have both of them available, but … it’s just about being ready for opportunities.”

McRae expressed the wider relief around Collingwood that Moore had avoided a long-term knee injury.

“Anyone watching the game would have thought, ‘that’s not a good outcome for us’,” he said.

“We’re really grateful he’s able to escape any of those structural damages.

“He’s one of those players you just can’t replace, so to think he’s going to be available in some form in the coming weeks is really pleasing.”

“It looks like he’s fractured it pretty badly … this is just another setback for the guy,” he said.

“He’s one of those players you love to coach – he constantly says ‘what can I do? I will do anything for you, play any role’.

“We’ll have to rally around him.”

Ruckman Brodie Grundy is expected to return to full training next week as he recovers from a knee injury.

McRae also expressed some sympathy for Jordan De Goey, who made a quiet return last week after his latest off-field incident.

“He’s human, isn’t he? He’s had a lot going on, as we all know, and this game is hard enough to perform to the best of your ability at the best of times,” McRae said.

“So we just talked about training well, preparing well.”

Storm star’s confession after ugly encounter with Sharks fan: ‘What did you say brah?’

Denial of responsibility! NewsConcerns is an automatic aggregator of the all world’s media. In each content, the hyperlink to the primary source is specified. All trademarks belong to their rightful owners, all materials to their authors. If you are the owner of the content and do not want us to publish your materials, please contact us by email – admin@newsconcerns.com. The content will be deleted within 24 hours.
AFLCollingwood MagpiesNorth Melbourne KangaroosSport
0
Share