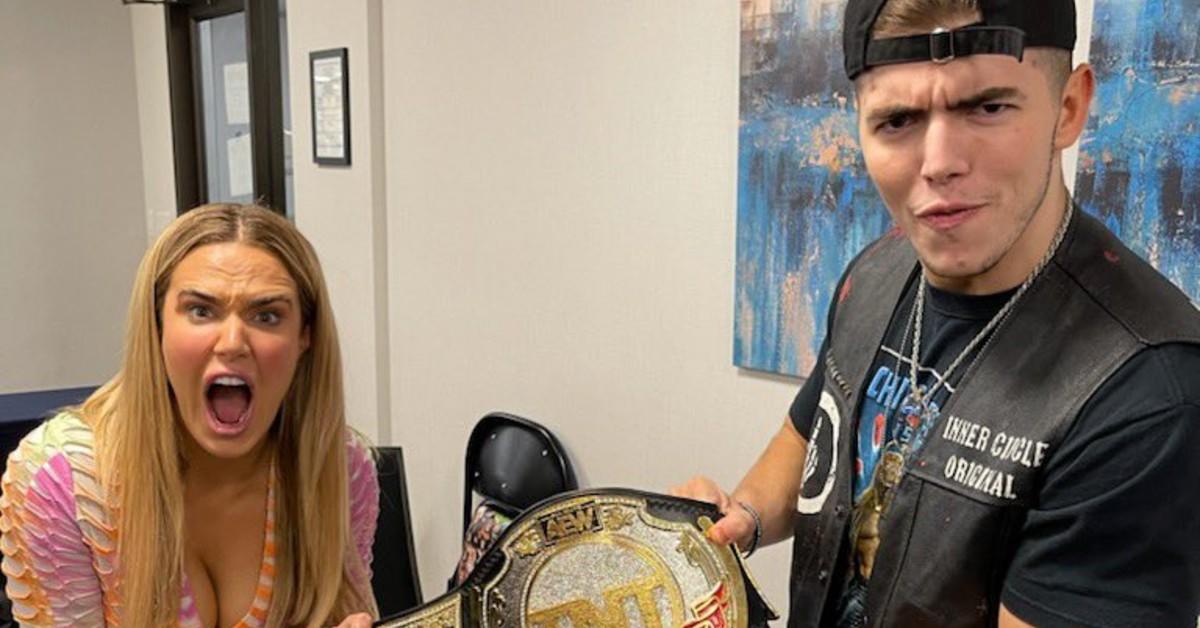 This week’s AEW Dynamite saw Sammy Guevara dethrone Miro of the TNT Championship, bringing “The Redeemer’s” reign to an end at 140 days. Miro repeatedly mentioned his wife, former WWE Superstar Lana (CJ Perry), in promos throughout his reign, but “The Ravishing Russian” never made an appearance on AEW programming. She did however manage to run into Guevara at the Legends of the Ring convention in New Jersey over the weekend.

“First of all, you cheated,” Lana claimed in a video with Guevara. “You legitimately cheated (Guevara jokes about hitting the 630 Splash right onto Miro’s groin, then says Miro was trying to cheat with the turnbuckles ). He never cheats, I don’t even know what you’re talking about. We always play by the rules. They cheated and they won, so I might have to steal this (the title) in the middle of the night.

Minutes after his victory, Guevara was challenged to a match with the title on the line on next week’s Dynamite against former NXT star Bobby Fish. The multi-time NXT Tag Team Champion and former Undisputed Era member was released last month but competed in Major League Wrestling’s Fightland event this weekend.

“I’d like to congratulate the new TNT Champion @sammyguevara and be the first to challenge him for that title. Ready to walk through the forbidden door!” Fish tweeted, prompting a response from Guevara in a backstage interview.

The challengers are knocking on The Forbidden Door to face new TNT Champion @sammyguevara. The Spanish God accepts the challenge to defend his title against @theBobbyFish on the #AEWDynamite 2 Year Anniversary Special THIS WEDNESDAY on TNT! pic.twitter.com/UB5ISD7OhP

As for Lana, the former WWE star has claimed in interviews she won’t sign to another pro wrestling promotion unless her deal comes with a “No-Cut Clause.”

“I felt really relieved in the sense of like, I’ve been waiting for this call. That’s the part I don’t like about the environment. I want to — whatever wrestling contract I have next if I stay in wrestling, which I hope I do, I want a no-cut clause, that was the worst,” she said while on the Talk Is Jericho Podcast in July.

Check out the updated lineup for this week’s AEW Dynamite below! The event will celebrate the two-year anniversary of Dynamite launching as a weekly program on TNT.

Denial of responsibility! NewsConcerns is an automatic aggregator of the all world’s media. In each content, the hyperlink to the primary source is specified. All trademarks belong to their rightful owners, all materials to their authors. If you are the owner of the content and do not want us to publish your materials, please contact us by email – admin@newsconcerns.com. The content will be deleted within 24 hours.
All Elite Wrestling (AEW)Lana (WWE)Sammy Guevara (AEW)
0
Share