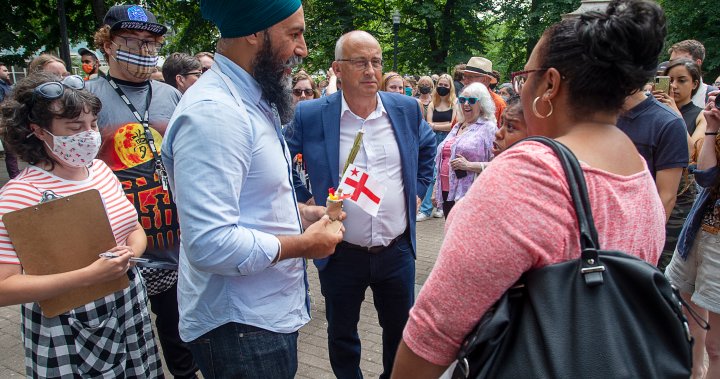 New Democrat Leader Jagmeet Singh unfurled a blueprint for the NDP campaign platform Thursday, doubling down on affordability and economic populism as federal opposition leaders criss-cross the country ahead of an election race expected to kick off in the coming days.

“Tax the ultrarich to invest in people. That’s our plan. And really no other party is willing to say those words,” Singh told reporters in St. John’s, N.L.

Universal pharmacare and dental care, a $20 minimum wage and student debt cancellation comprise part of the proto-platform, which Singh labels his “commitments for a New Deal for people” in a not-so-subtle nod to the state-led progressivism of former U.S. president Franklin Roosevelt.

The 115-page document pledges a one per cent tax on households with fortunes topping $10 million and a temporary 15 per cent tax on large companies that enjoyed windfall profits during the COVID-19 pandemic.

0:48
Jagmeet Singh thinks next federal election should be 2 years away given COVID-19 concerns

Jagmeet Singh thinks next federal election should be 2 years away given COVID-19 concerns – Jul 9, 2021

An income tax hike of two points to 35 per cent for the highest bracket — currently $216,511 and above — and a three-point hike to put the corporate tax rate at 18 per cent are also planned.

Singh said the resulting revenue could fund the pricey promises, and that the party will work with the parliamentary budget officer to cost out portions of a more detailed platform. Thursday’s action plan includes no accounting.

“In all cases, we will manage debt and deficits responsibly, borrowing when required to rebuild and defend the services that Canadians and their families rely on, and moving to balance when it is prudent to do so,” it states.

The document marks an updated version of New Democrats’ platform in the 2019 campaign, when they lost 15 seats to leave them in fourth place in the House of Commons. But Singh expressed faith Canadians would find the smorgasbord of policies appetizing.

“Sometimes you look at items on that menu and you say, ‘You know what, maybe I should have bought that thing last time.’ And that’s what we’re hoping people realize.”

Singh isn’t the only opposition leader aiming to jump the gun on the federal horse race. Conservative Leader Erin O’Toole is also off and running, making whistle stops in at least seven provinces in the past four weeks.

On Wednesday in Waterloo, Ont., he laid out his plan to spur innovation by cutting the income tax rate in half on new patented technologies developed in Canada, which followed a pledge Monday to connect every Canadian with high-speed internet by 2025.

Prime Minister Justin Trudeau has also been jetting across Canada in recent weeks as he and his cabinet sign child-care funding deals with more than half the country’s premiers and make a flurry of funding announcements.

Within its first mandate, an NDP government would implement a guaranteed livable income for seniors and Canadians with disabilities as well as universal pharmacare, dental care and mental health care, New Democrat officials said at a morning briefing.

Pocketbook pledges range from more affordable housing to a price cap on cellphone and internet bills and 30-year terms on mortgages insured by the Canada Mortgage and Housing Corporation.

Other promises include 10 days’ paid sick leave for federally regulated workers, rapid reductions to greenhouse gas emissions and implementation of the Truth and Reconciliation Commission’s 94 calls to action.

Denial of responsibility! NewsConcerns is an automatic aggregator of the all world’s media. In each content, the hyperlink to the primary source is specified. All trademarks belong to their rightful owners, all materials to their authors. If you are the owner of the content and do not want us to publish your materials, please contact us by email – admin@newsconcerns.com. The content will be deleted within 24 hours.
Canadaelection 2021Election Platformelection platform NDPJagmeet SinghNDPNDP CampaignNDP commitments
0
Share

Is your mobile provider tracking your location? New technology could stop it — ScienceDaily